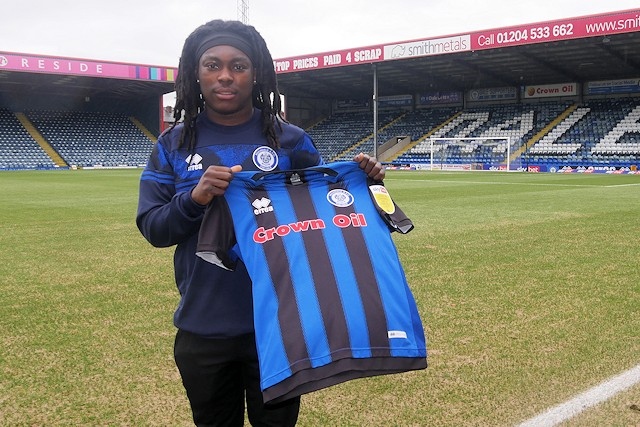 Forward Abraham Odoh has signed to Rochdale AFC until the summer of 2022.

Free agent Odoh has been training with Dale for over a month and has featured as a trialist in the Integration Squad’s Central League Cup games against Carlisle United and Fleetwood Town, scoring in both fixtures.

The 20-year-old has most recently been at Charlton Athletic, where he spent 18 months, following a move there from Isthmian League South Central Division’s Tooting and Mitcham. After originally joining the Addicks on loan, he went on to sign a permanent deal with the side before being released last summer.

He made his professional debut in Charlton’s FA Cup third round tie against West Bromwich Albion at the Valley last January.

“As soon as I heard it was a first team opportunity, which is all I have wanted, I said yes - there was no going back.

“Getting my opportunity is what I’ve been waiting for so I’m hoping I can take it.

“The lads have made me welcome and Brian is a very good manager - he makes me feel confident. I have really enjoyed my time here.”

Manager Brian Barry-Murphy added: “He was a young lad who had a very bright future at a very early age. He left Millwall Academy and then burst onto the scene at Charlton, and for whatever reason hasn’t been able to progress there, but he’s part of what we see as a core group of very young players who we can develop.

“We can offer him the chance of playing league football which probably helped us in the case because he had a lot of suitors at top Category 1 clubs in the Premier League but mainly at U23 level.

“So he’s very similar to Kwadwo Baah in terms of his background and where he has come from, and very similar, from our point of view, in terms of what we can offer, which has enabled us to acquire such a talented young player ahead of the so called giants of the game.”