You are Here: Home » News » Sport News » Local teen to make his debut in elite racing championship this year 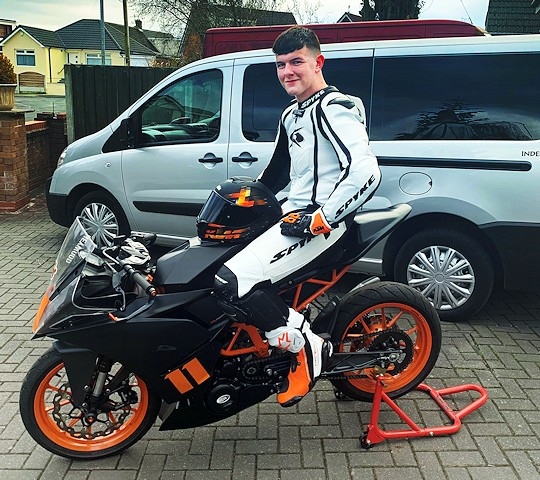 A 16-year-old local teen will debut his motorbike talents as he takes to his first ever racing championship later this year.

Stuart Heywood will compete for the number one spot in the Thundersport Superteens - considered the stage before British championship level – which begins in May at Norfolk’s Snetterton Circuit.

A class for junior riders from 13 to 19 years of age, riders can compete in Superteens on any production-based machine with a 12 or 13-year-old novice permission.

Stuart, who has ridden motorbikes all his life and has a ‘deep passion’ for the sport, said: “I feel honoured to be able to represent Rochdale in this championship!

“To be racing in Thundersport Superteens is a very big opportunity, as motorbike racers such as Chaz Davies and Cal Crutchlow have all gone through the same championship.

“I’m very enthusiastic about getting some good results this year - I have a good team surrounding me and also some experienced racer friends to help develop me as a rider.”

The 16-year-old took an interest in the motorsport when he was just four years old. Starting with a quad bike, his interest in motorcycles was really kicked into gear when his dad was watching a race on television.

Stuart continued: “What inspired me the most was when I was watching Tommy Hill and John Hopkins fighting for the British Championship in 2011 and it all came down to whoever won the race won the championship. From that day on, I’ve been hooked.”

Explaining how he is preparing for his debut, Stuart added: “I try and get as much practise on the bike as I can with track days which allows me time to test different set ups for the bike and develop my race craft. However, due to Covid restrictions at the moment track time has been limited.

“I’m also cleaning up my diet and having to physically train my body by cycling and running to build cardiovascular strength and weights to build my physical strength to be able to handle the physical and mental excursions while racing.

“I have ridden in numerous off-road events before, such as trials riding events and motocross, which have given me good bike experience.

“This being my debut season in Thundersport Superteens, and with the backing from SMC KTM in Huddersfield, we are very much looking forward to challenging for some solid results this season.”

The Thundersport Superteens series goes all over the country on major racing tracks, from the start of May all the way through to October 2021. Dates and tracks include: