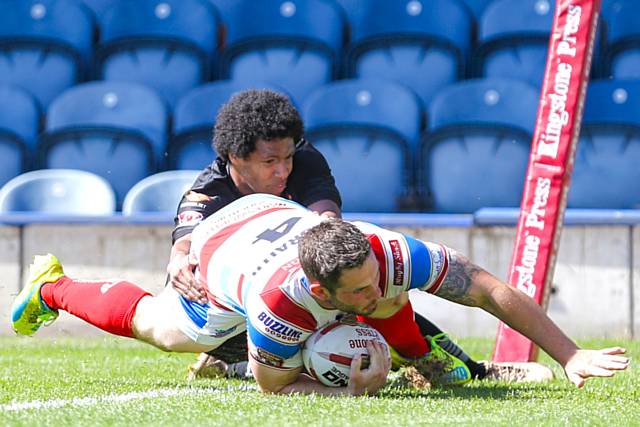 Lewis Galbraith scoring a try for Hornets in 2017

Rochdale Hornets have today (Friday 26 March) announced the signing of Lewis Galbraith from Championship club Batley for an undisclosed fee.

The powerful centre originally made his debut for Hornets in 2014, and made more than 40 appearances for Hornets, scoring 16 tries.

On his return to the club, Galbraith said: “I’m really happy to be back at Rochdale. I think the best rugby I’ve ever played personally and as a team has been at Rochdale, especially with gaining promotion a few years ago, so it’s a really happy feeling coming back to the club and I hope Rochdale can do something great this year too.

“Matt Calland is a great coach and a great bloke, so I’m looking forward to playing under him this year. I’m also looking forward to getting back together with some of the lads I’ve played with here before, so it'll be great to play with them again.”

On the signing, head coach Matt Calland said: “I am delighted to bring Lewis back to the club.

“He has been on my radar for a while now and he will give us some genuine strike on the edges.”

Chairman Andy Mazey is thrilled to bring Galbraith back to the club. He said: “I’m absolutely delighted to reach an agreement with Batley for the transfer of a quality Championship player.

“I would like to thank my counterpart Kevin Nicholas for enabling this deal to take place and hopefully it’s further evidence to our supporters, partners and wider community of the direction Rochdale Hornets is now heading in. Welcome back Trigger!”