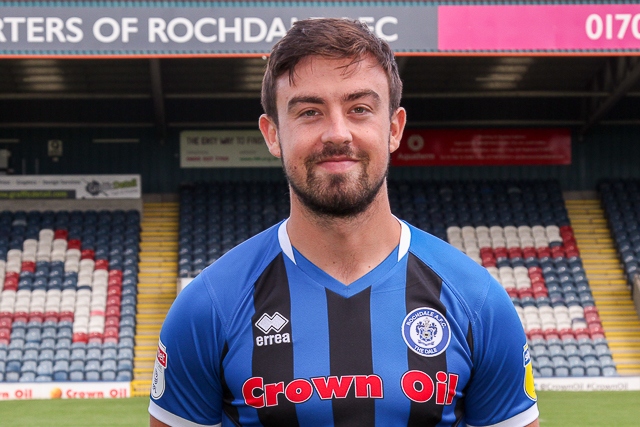 Rochdale’s relegation worries increased with defeat at Fleetwood on Saturday (10 April 2021) in what was a lacklustre performance from Brian Barry-Murphy’s side.

Eoghan O’Connell’s own goal early in the second half was all that separated the two sides whilst defeat, coupled with results elsewhere, means Dale remain rooted to the foot of the table and six points from safety with seven games remaining.

Barry-Murphy welcomed back Ryan McLaughlin from injury which allowed Matty Done to be deployed in the frontline although the veteran’s afternoon was cut short due to a head injury. The striker clashed with James Hill leaving him prone on the floor with medical teams from both sides quickly onto the pitch to assist. Done was soon on his feet and adamant he wanted to continue with the game but on advice of the Fleetwood Town doctor, Done was withdrawn from the action as it was felt he had suffered a concussion; Kwadwo Baah came on to replace him.

The first half was a poor spectacle with neither goalkeeper seriously troubled. Former Dale midfielder Callum Camps sent a spectacular scissor kick wide although the best chance of the first half came Dale’s way. Keohane did well to keep the ball in play to the left of the goal with his pull back perfect for Baah who sliced a shot so wide, it almost went out for a throw on the right side of the pitch. The ball was kept alive by McLaughlin who drove towards the by-line before pulling back for Ollie Rathbone; his shot was saved by the foot of Alex Cairns.

Dale needed a big second half and almost took the lead three minutes after the re-start. Baah capitalised on a slip in the Fleetwood defence, his run and cross from the left found Jake Beesley, but his header lacked pace with Cairns holding on easily.

Wes Burns for the hosts was a handful throughout and when he raced down the right leaving Keohane in his wake, the former Wales U21 International sent a cross into the six yard box that was turned in by Dale captain O’Connell.

O’Connell almost made amends for his error just 90 seconds later. A free-kick awarded on the edge of the centre circle saw O’Connell catch Fleetwood unawares - with Cairns off his line he took a quick free-kick; the goalkeeper scrambling back to tip the ball over the bar.

Burns picked up a stray pass from McLaughlin and with time and space will have been disappointed his shot flashed across the face of goal.

Another quickly taken free-kick, this time from substitute Aaron Morley, again almost caught out Cairns who was glad to see Morley’s attempt from distance hit the side netting.

In the end, Fleetwood, who only registered one shot on target all game, saw the game out comfortably leaving Rochdale rooted to the foot of the table and with games running out, it's looking bleak for the Spotland outfit in their bid to avoid relegation.

On Tuesday evening (13 April), Dale will play relegation rivals Swindon Town at the Crown Oil Arena in what is a must win game if Rochdale are to get out of the bottom four.