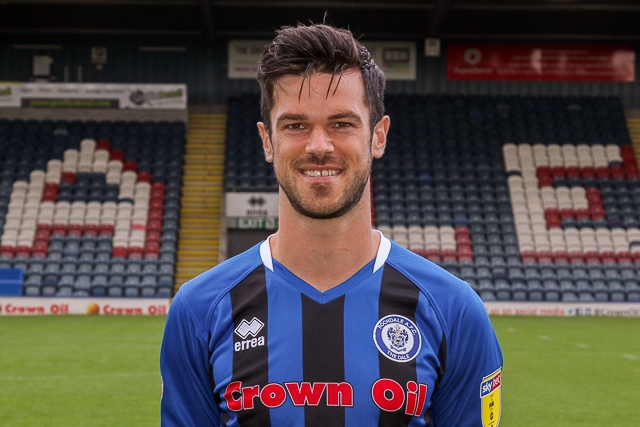 Rochdale gave themselves a lifeline in their battle against relegation with a 3-1 win against Accrington Stanley at the Crown Oil Arena on Saturday (17 April).

After getting their first home win in six months with the midweek win over Swindon, a dominant display against Stanley gives hope that Brian Barry-Murphy’s side can climb out of danger. Goals from Jimmy Keohane, Jake Beesley and a 40-yard effort from Conor Shaughnessy sealed the points.

Knowing only a win would suffice in their battle to avoid the drop, Dale started brightly and took the lead inside ten minutes with a beautifully crafted goal. A swift move with some lovely one touch football carved open the Stanley defence with Ollie Rathbone backheeling the ball into the path of Keohane who curled a shot around Toby Savin.

The lead however lasted less than three minutes as defender Ben Barclay headed in. An Accrington corner was partially cleared but when David Morgan swung a teasing ball back in form the right, Barclay outjumped Eoghan O’Connell to head inside Jay Lynch’s near post.

Both sides had spells of attacking football and Dale almost took the lead in the 20th minute. A swift counterattack had the visitors back peddling with Aaron Morley finding Rathbone. The energetic midfielder’s clever lay off found Conor Grant who thought he had scored but for a deft touch from a defender deflecting the ball onto the post.

Sean McConville, who had a spell on loan at Rochdale back in 2012, brought about a good save from Lynch with a free kick from the left side of the area.

The second half had much the same feel about it and the next goal would be crucial as to deciding the outcome of this game. Beesley was lucky not suffer injury when Barclay’s high boot clearance caught the Dale striker in the face right on the edge of the Accrington penalty area. The free kick was easily defended by the visitors.

Paul Smyth, on loan at Accrington from QPR, should have scored for his side eight minutes into the second period. The diminutive striker beat the offside trap to find himself one-on-one with Lynch; the Dale keeper coming out on top in the battle of wits as he blocked his effort although the danger wasn’t gone. The ball was worked back out to the left and with a deep cross causing concern in the Dale backline, it was a relief to see Harvey Rodgers’ header fly over.

A Rathbone cross from the left looked like a simple catch for Savin in the Stanley goal but the young keeper made a hash of it and spilled the cross onto his own crossbar, but it would not take long before Dale would edge in front again.

A Morley free kick from the left in the 66th minute was flicked at goal by Gabriel Osho; Savin got down well to save although the ball fell kindly at the feet of Beesley who made no mistake from six yards out.

Barry-Murphy’s side looked to control the remainder of the game with Lynch not seriously tested and another mistake by Savin deep into stoppage time saw Dale net their third.

Morley’s lofted ball into the corner saw the 20-year-old keeper come out and as he was outside his area, he was forced to kick the ball. His poor connection saw the ball fall at the feet of substitute Shaughnessy who produced a cool finish from 40 yards out to pass the ball into the empty net.

The win has moved Dale off the foot of the Sky Bet League One table after Swindon and Bristol Rovers both lost on Saturday. Results elsewhere means that Dale are still five points adrift of safety with a game in hand: that game coming against AFC Wimbledon at Plough Lane on Tuesday 27 April (7pm KO).

Up next is a home game against Blackpool on Tuesday (20 April) who will prove a difficult opposition but with confidence running high, who knows what the outcome will be.