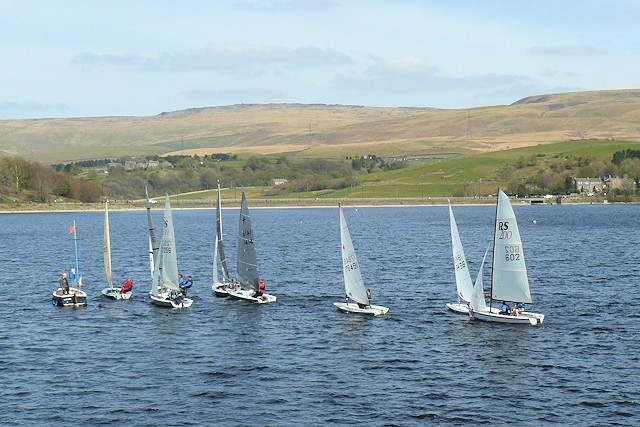 The start of the second race on Hollingworth Lake

There was a sharp contrast for sailors at the lake on Sunday (25 April) from the previous week. The breeze was coming from the south east quite strongly at times, enough to capsize the unlucky.

Some strong gusts provided exciting reaches but flat spots also had an impact. The runaway leader was Richard and Heather Marsh in their RS400, but the handicap gave Martin Brennan, in a Solo, the win ahead of the Marsh pair and Julian Parry also in a Solo. The slowest boat was the Mirror of Chris Massey and young daughter Annabelle who finished fourth, thanks to the handicap system.

There was confusion at the start of the second race as the fleet were too keen to get going. So another try was successful. A change of course kept racers closer together and let to an exciting finish with 5 boats crossing the line within 10 seconds. The overall results again showed Martin Brennan as winner, after a long battle for success with Julian Parry coming in second. Les Bithell and Emma Turner, in a Merlin Rocket, had a better race in third place with Tom Daniel, in a Laser, fourth a couple of seconds ahead of Chris Massey (now in a Laser too).

Fewer boats sailed the last race, perhaps exhausted by the strong breeze. Again the racing was close and Julian Parry now finished ahead of Martin Brennan, beaten at the finish by Chris Massey and Les Bithell with Emma Turner.

This concludes the first series of the year with Martin Brennan overall winner, Les Bithell and Emma Turner second, the Marshs third and regular Solo sailor, Kevin Parry in fourth.