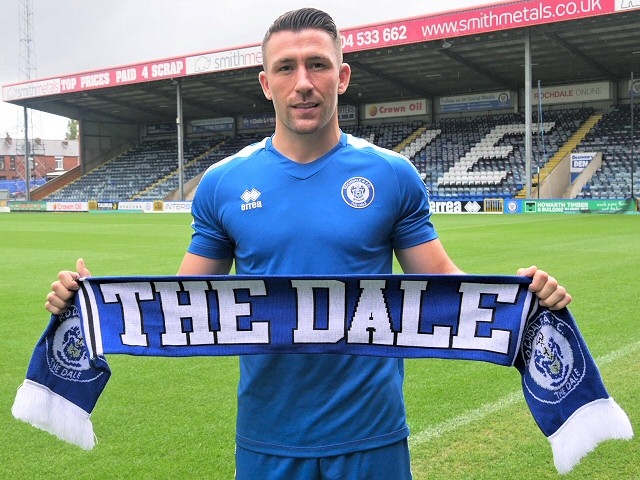 AFC Wimbledon scored a dramatic 97th minute equaliser on Tuesday 27 April to deny Rochdale a crucial three points in their quest for League One survival. Joe Pigott made amends for earlier seeing his penalty saved when he netted from the edge of the area to cruelly deny Brian Barry-Murphy’s side what would have been a major lifeline.

Rochdale started the day five points adrift of Wigan Athletic in 20th position and six points off Wimbledon in 19th position. Realistically only a win would do if Dale were to push the relegation scrap right to the wire. A win for the hosts would pretty much guarantee their place in League One for next season and they took the game to Dale from the first whistle.

For the opening 35 minutes, Barry-Murphy’s side struggled to keep pace with the home side with Jack Rudoni and Ollie Palmer going close.

Wimbledon had appeals for a penalty turned down when the ball seemed to hit the arm of Jim McNulty with Dale then finding their feet in the game in the last ten minutes of the first period. Jimmy Keohane curling an effort wide of the right hand post the closest they came until the 41st minute.

What looked a poor corner from Conor Grant evaded everybody inside the six-yard box with Jake Beesley arriving to simply tap in to open the scoring and give Dale the lead.

A few minutes later, just before half time, Beesley had penalty claims waived away by referee Carl Brooks when he was seemingly tripped when trying to strike at goal.

The scores were nearly level a minute after the restart when 'Dons full back Luke O’Neil’s cross flew over Jay Lynch and off the top of the crossbar.

Knowing only a win would do, Dale doubled their advantage just begore the hour mark through Gabriel Osho. The on-loan Luton Town defender headed his first senior goal when he latched onto a Conor Shaughnessy long throw into the area.

Wimbledon stepped up a gear and when another O’Neil centre ball came in from the right, Lynch and Dale captain O’Connell got in each other’s way with the keeper spilling the ball at the feet of Ollie Palmer for a simple tap in to level the scores.

The topsy turvy game then swung in favour of Dale once again in the 73rd minute when Shaughnessy’s flick on from a Matty Done corner was headed in at the back post by Jimmy Keohane to make the score 3-2 to the visitors.

Ten minutes later, the Dons were awarded a penalty when Palmer was brought down by a combination of McNulty and Lynch. Pigott stepped up but for the second time in a week, Jay Lynch saved the spot kick, and the Dale players were quickly in to clear the ball to protect their precious one goal lead.

As the game went into six minutes of added time, Wimbledon thew everything at Dale who seemingly had done enough until almost the last kick of the game. A ball from the right landed at the feet of Pigott, who still with a lot to do, turned and fired beyond the dive of Lynch to spark jubilant celebrations from those of a Dons persuasion inside Plough Lane.

The Dale players dropped to their knees in desperation and as the full-time whistle went, the realisation that those dropped points means it’s now unlikely they will be able to stave of relegation heading into the last two games. They are four points from safety with two games remaining meaning they will require teams above them to drop points if they are to pull off the great escape.