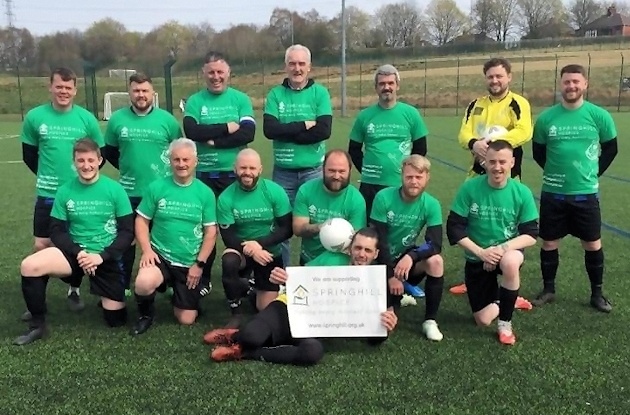 A charity football match between Rochdale AFC Military Veterans and their Oldham Athletic counterparts will take place at the Mayfield Sports Centre on Saturday 5 June (3pm kick off).

After already raising a remarkable £510 for Springhill Hospice, the match was due to take place on Saturday 8 May at the Crown Oil Arena, but unfortunately due to unforeseen circumstances, this has now been postponed with a change of venue.

Established in February 2020 by Adam Trennery, a former Royal Navy Weapons Engineer, the Rochdale AFC veterans team provides military veterans with an opportunity to get together on a weekly basis with like-minded individuals, keep physically and mentally active, all whilst bonding over a mutual love for the beautiful game.

Speaking about how the team was founded, Adam said: “I’d previously been involved in the military veterans team at Curzon Ashton, and when I moved into the local area I realised that Rochdale didn’t have a team. I immediately spoke to Keith Hicks (former Trust Manager) and asked if he would be happy for me to run a team on behalf of the Trust - we haven’t looked back since.” 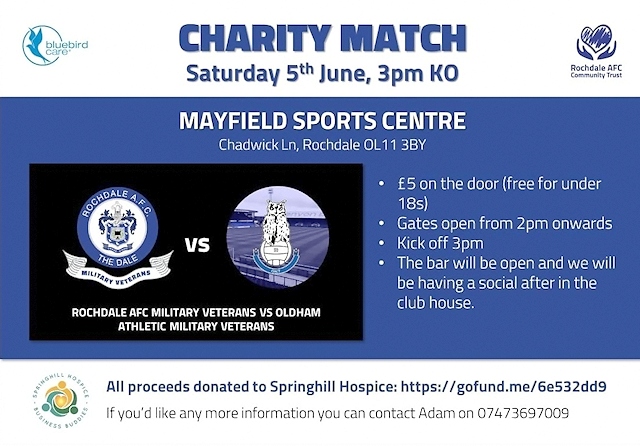 Nowadays, the club, which is run in partnership with the community trust, has two other committee members and is growing at a rapidly increasing rate.

What initially started as a weekly training session for former servicemen to keep active has now developed into a fully competitive team, ready to take the local and regional community football scene by storm.

Whilst the team might be flying, Adam explained that the team is about much more than enjoying success, adding: “It’s an open book for any ex-military personnel to come down and get involved with us. It’s not too serious, it’s an opportunity to get the lads together and have a kickabout. Everyone loves it and it’s a laugh – it’s got a real family feel.”

Looking ahead to the future, Adam revealed he is actively working to create a military veterans league/cup competition featuring a host of the region’s professional football clubs, whilst he’s also exploring the long-term possibilities of entering the team in an appropriate league.

Donations for the charity match are still very much welcomed via the team’s GoFundMe page, which can be viewed here, and entry on the day is £5, with proceeds going to the hospice.

For any former services personnel looking to get involved with the Rochdale AFC Military Veterans team, you can contact Adam on 07473 697009, or visit the team’s Facebook page.