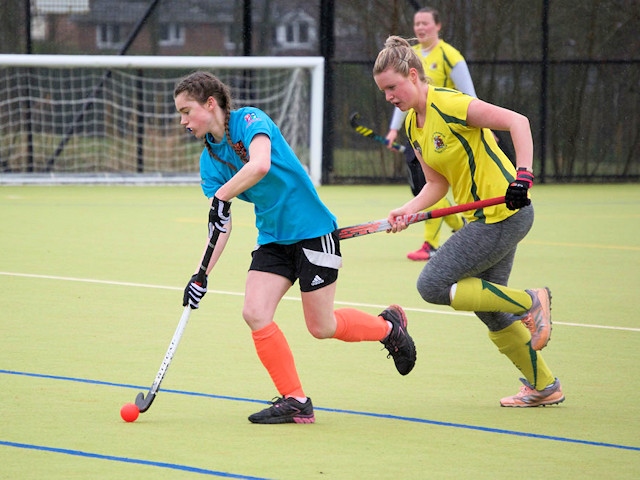 This weekend Rochdale were away to play Glossop Ladies 1sts  in their second friendly of the season. The weather wasn't quite as sunny as for the previous match, but it just about stayed dry.

The main ladies hockey league for 2020/21 has been cancelled due to the pandemic. However, now that outdoor sport has been allowed to resume, a friendly set of fixtures has been arranged with a total of seven matches for each team involved.

It was another strong start for Rochdale, as they kept the play in Glossop's half for the opening portion of the game. In doing so they managed to snag themselves three short corners to give themselves some excellent chances for a goal. Unfortunately the opposition were able to defend their area too well and Rochdale were denied an early goal, with one particularly agonising near miss from Knowles.

S Ransome managed to intercept the ball on the left wing as it travelled between Glossop players, and quickly switched it around the back via Collinson to Pickering on the right wing who drove it down the pitch before passing it across the D where Burrell picked it up and took a strike to win Rochdale a goal.

A Glossop short corner was well defended as Moon ran out to the top of the D forcing the ball out wide where Mongan was determined and dug in to clear it from the D. As Glossop sought to convert their advantage into a goal Rochdale's defence rallied to stop them, with Owen finally clearing it away.

Another attacking run saw Rochdale awarded yet another short corner. They kept the play going well despite the opposition digging in to defend, picking up many deflections before another close shot on goal. Glossop took advantage of their free hit to make a break for Rochdale's goal, but the effort was seen off by some quality defending.

Owen hit it to McDonald, who passed it further into the midfield were it bounced between Hodcroft and Pickering as they worked their way up the pitch. Pickering passed it off ahead of Hodcroft who ran onto it, taking her shot the moment she entered the D, but the keeper saved it. Burrell was in the right place to pick up the deflection and made her own shot but didn't get a goal.

A penalty flick was awarded and Mongan stepped up to take it. The umpire called for it to be retaken, but unfortunately the keeper saved it both times.

As the second half started Rochdale were upbeat due to their fantastic performance. Hodcroft managed to get her stick to the ball again and drove it down the pitch before crossing it in the D to S Ransome who tried to lift it over a defender's stick, but unfortunately the defence denied her.

From a free hit in Glossop's defence area, Pickering hustled her way around a couple of defenders before passing it off to Burrell who took a shot on goal. Glossop's keeper stopped it, but the ball landed behind her, Burrell darted forward to get her stick to it to try and nudge it in, and Newton was there to finish the job by securing it over the goal line.

Glossop managed to break through again and won a short corner, but were seen off by some excellent defending, especially by Moon and Collinson running to hold them at the top of the D. Unfortunately Rochdale were unable to properly clear the ball away and so the opposition were able to dig in. After some more good defensive work Glossop managed to intercept the ball. Their strike at the top of the D bounced off Owen giving Glossop another strike chance which finally slipped in behind Partington, after bouncing off her a couple of times as she made some excellent saves.

Rochdale pushed back after that, keeping the play high and attacking as much as they could whilst Glossop defended well. A few attempts where they pulled the ball out wide - especially on the left wing using J Ransome and Knowles - nearly got them a couple of goals. A long corner gave them another opportunity, but the final whistle went before McDonald had time to take it.

The final score was 2-1 to Rochdale, with goal scorers Katie Burrell (1) Becca Newton (1).

Captain Knowles said: "Thanks for such a good game ladies, we have played an absolute belter. Bring on the next!”