You are Here: Home » News » Sport News » Sandro gets back on track with a winning streak

Sandro gets back on track with a winning streak 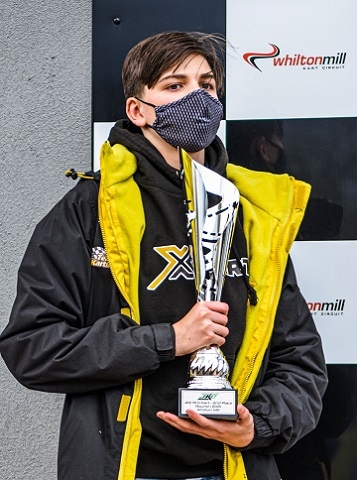 A 14-year-old racing driver from Rochdale has kicked off his 2021 racing season with some strong performances, securing silverware and fastest lap times in his opening races.

Sandro Ballesteros, who is currently in year 9 at Wardle Academy, signed for Team X-Kart in November, a new team formed to race in the Italian ‘X-Kart’ go-kart, recently introduced in the UK.

Sandro took part in the first round of the Junior Kart Championships at Whilton Mill on 2 May, competing in both the ‘Rotax and Prokart’ junior classes. Despite some technical issues and an early puncture affecting qualifying, Sandro battled to third in the first heat of Prokart before finishing in an incredible second position, posting the fastest laps of the race in the final.

In Rotax, he finished in a respectable sixth, posting a faster lap than the race winner.

Sandro then went on to compete in round two of the British ProKart Endurance Championship, back at Whilton Mill on Sunday 9 May. Joined by his X Kart teammates, Will Young and Kai Bachini, the trio took on the six-hour endurance race, finishing first in the junior category, securing yet more silverware.

Sandro said: “It’s brilliant to come away with trophies so early in the season. There were a lot of challenges, from technical problems, punctures, getting caught up in other drivers spin offs, but I pushed on in every race to the best of my ability.

“The three of us worked so well together in the endurance championship and I know we’ve got a great year ahead.”

Sandro was diagnosed with autism when he was three and had his first experience in a kart aged five. His natural talent for racing was clear when he completed a beginner’s karting course in six weeks, that takes on average, three months to pass.

He began racing in Daytona Bambinos, and won his first Bambino Championship in his second year of karting, aged 7. In his first year of junior pro-kart championships in 2019/20, he finished third in the winter series.

Sandro has worked closely with the founder of Team X-Kart and owner of TeamKarting circuit in Rochdale, Matty Street for many years. Matty also lives with autism and has become a mentor and older brother figure to Sandro.

Sandro will race again in the BPEC on 20 June at GYG, and in both classes again in Junior Kart Championship at Fulbeck on 4 July.