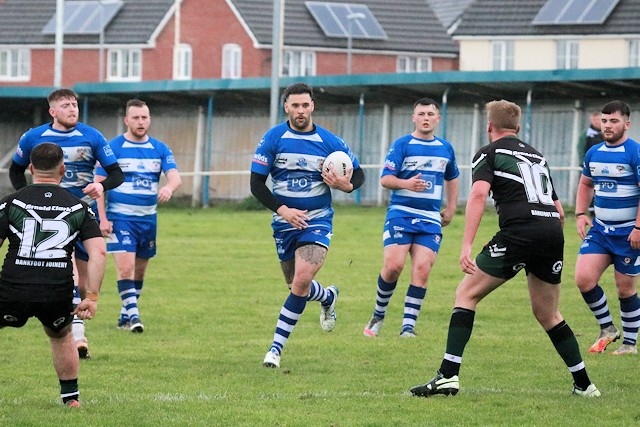 Man of the match, Si Moore (with the ball)

Mayfield's senior side welcomed back rugby league on Saturday (15 May) as they hosted West Bowling ARLFC from Bradford in a friendly game at the Mayfield Sports Centre.

The only thing missing was a crowd as spectators are not to be admitted to games just yet.

West Bowling arrived with a strong side and a strong reputation and showed from the kick off that they meant business as their scrum half found touch with the kick off giving his side possession from the start.

With no scrums allowed, it was always anticipated that this would be a fast paced game and the Bradford side showed this as they took the tap restart and went at the Mayfield line. A strong Mayfield defence kept them at bay but they showed their intent in a very good first set.

Ieuan Higgs, Si Moore and the returning Jack Rush all had good starts to the game getting involved right from the off. They laid the platform for Aidy Gleeson to put Liam Donnelly through the gap with a great pass to open the scoring for Mayfield.

The home side were enjoying their first outing and were soon pressing in West Bowling's ten but a sloppy mistake gifted possession to the visitors. Bowling showed their class as they upped the pace of the game and caught Mayfield napping, working quickly up field and moving the ball wide to score a well worked try. The conversion gave them the lead, 4-6.

Zac Hartley found touch with the restart for Mayfield and his side were straight back at the line, almost scoring off a Chris Hough pass but the ball went to ground. Donnelly and Jackson Kelly stood tall in defence to keep the visitors out while Hough started probing their line looking for weaknesses. He soon found one as the rain came down and he put Andy Taylor in for the first of his two tries, Cole Connelly converted, 10-6.

Both sides were showing they were a little ring rusty and mistakes crept in but both also played some excellent rugby considering the lengthy lay off. It was a couple of these unforced errors though that allowed Bowling to reclaim the lead after a missed touch finder followed by missed tackles as they scored out wide, 10-12.

Mayfield responded well and a great kick chase saw possession regained as the ball receiver was forced into touch by a group of Mayfield players, lead once again by the all action Jackson Kelly. New signing Jake Castree was unlucky not to get on the scoresheet as he was held up on the line and Mayfield went in two points down at half time. Coaches Sam Butterworth and Steve Wood were reasonably happy with the performance but stressed during the break that their side needed to be switched on all the time and tighten up the defence.

It didn't take long before Mayfield reclaimed the lead with a Si Moore try converted by Connolly, 16-12.

The home side then hit a purple patch showing their class as they scored another two converted tries through Rush and then Taylor's second after a stroke of genius from Hartley.

At 28-12 the Yorkshire side looked dead and buried but it seemed that nobody had told them that. A speculative kick down the wing was left by the Mayfield defence as they were sure the ball had gone out of play but as the old adage goes 'you should always play to the whistle'. Bowling did just that and their winger flew through to touch down for a controversial try, brilliantly converted from the touch line, two more unanswered scores gave them the lead at 28-30 and started a bit of nail biting on the touchlines for the coaching staff.

Like the Mayfield of old, the home side rallied and hit back in a great finale pushing and prodding for the opening which was eventually found by Aidy Gleeson, revelling in his new role as stand off jinked his way over for the winning score, converted by Connolly, 34-30.

Mayfield showed there is a lot more to come once the younger players in the team settle into the season and get into their stride. Corey Newsham, Joe Schofield and Jordan Parr all gave glimpses of their class. Rush, Hargreaves and Donnelly all looked like they will be the corner stones of a strong pack while Si Moore just took the man of the match award in a close contest between him and Jackson Kelly.