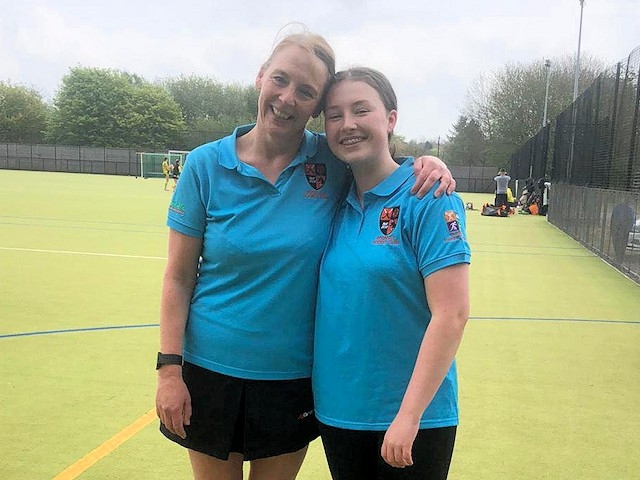 Rochdale were away last weekend to play City of Manchester Ladies 2s for their third friendly of the season, on a typically British day of intermittent rain showers.

Manchester started with the ball, but Rochdale quickly gained possession and for the first portion of the game they held play deep into their opposition's defence, with Knowles, Hodcroft, A McDonald, Pickering and S Ransome working well together to keep the play on their terms. But due to a combination of Manchester's defence and a couple of amusing yet frustrating hits off the goalposts, they didn't manage to get themselves a goal.

Manchester made good use of their wingers to push back into Rochdale's end, but some strong defensive work from Rochdale, especially Mongan holding her player out wide of the D saw them off.

An interception from S Ransome regained Rochdale's possession, driving it down the pitch before passing it to Hodcroft who worked with Pickering to work their way down towards the goal again, before Hodcroft crossed it into the D, where S Ransome was able to receive it and pivoted into a tight roll out and snuck the ball in by the far post for the first goal of the match.

Now a goal behind, Manchester upped the ante, and for a time both teams were trading possession in the midfield as both made some good interceptions and tackles, until finally Manchester were able to push into Rochdale's defence. Despite the way Manchester kept switching both players and the ball between the wings, Rochdale did an brilliant job keeping their players marked and holding the ball outside the D and preventing their opposition gaining a clear shot if they got through. Especially Collinson, who did the leg work to be a wall that followed the D line, and Owen, who efficiently swept the ball away when Manchester did break through. The deadlock was broken when Manchester won a short corner, and were able to utilise it to slam the ball into the back of the net.

A free hit from Palmer to Pickering made a start down the pitch only for a Manchester player to successfully tackle. It was short lived as A McDonald swooped in as the opposition made to switch it and stole the ball back and passed it up the wing, only to rush to meet it herself. After a brief run A McDonald crossed it to S Ransome who picked it up in the D for a shot, but the keeper unfortunately stopped the goal.

The first half ended with a short corner in Manchester's favour, allowing them to push their whole team up to the edge of the D. The Rochdale defence dug in, but were ultimately outnumbered and Manchester managed to pull ahead.

Another Manchester attack was seen off by Collinson at the top of the D, who held the opposition there with her stick on the ground, easily manoeuvring herself so that when the opportunity presented itself she could use a reverse sweep to pass it to Pickering who nicked it around a player and handed it off to Hodcroft who drove it the rest of the way down the pitch, nimbly twisting and turning to avoid anyone in her way, only for the goalie to save her strike.

After another short corner where Rochdale prevented Manchester from getting a goal, the ball was pelted up the pitch and Banks was ready at the halfway line to receive it and make a run on the Manchester goal. Despite some great determination and a good run into the Manchester D, Banks was denied a goal as her strike deflected off a defender's stick and off the back line.

Rochdale were able to win themselves a short corner, and Banks received it and passed to Hodcroft who took a strike but Manchester's keeper blocked it but P McDonald snagged the rebound and hit it into the top right corner to equalise.

Manchester embarked on another dug in attack deep in Rochdale's defence, but Partington was ready for the shots that got past the defence, kicking the ball back away and continuing to make some great saves. Manchester had entrenched themselves, but with Mongan and Palmer marking players out, Owen playing sweeper and Collinson and J Ransome working the top of the D, they weren't able to make anything of it.

Another run from Pickering ended with a cracking cross from the wing into the D, only to be just out of reach of where Knowles was running to the post to deflect it in, agonisingly close to pulling ahead.

With a feeling of déjà vu the end of the second half also ended with Manchester winning a short corner, and yet again pushed their full team up to overload their striking capabilities. This time, however, Rochdale were not about to lose the match and battled to stop Manchester having an opening before a Manchester player fouled Owen, ending the short corner play and the match.

Captain Knowles said: "I couldn’t have asked for more today, every single player on the pitch played with determination.”