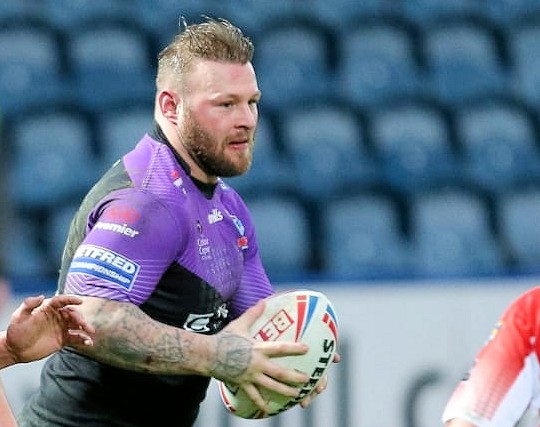 Rochdale Hornets survived a second-half comeback scare from Keighley Cougars to claim the two points on offer with a 36-43 victory at Cougar Park on Sunday 23 May.

Lewis Galbraith returned to the starting 13 following the completion of his two-match ban, while Fuifui Moimoi and Joe Taira both started in the front-row for Matt Calland’s side. Callum Marriott also returned following a short injury as he was named in the back-row.

It was Keighley who put on the early pressure with multiple sets close to Hornets’ try-line, and on the fourth set the hosts were awarded a penalty for a late tackle on the kicker in which they opted for the two, converted by Jack Miller on the eighth minute.

However, Hornets quickly answered back two minutes later with a try through Galbraith after a lovely show-and-go on his return to give Hornets a 2-4 lead.

Moimoi restarted the set with a powerful charge and won his side a penalty, which Hornets used the field position to their advantage as Ryan Forshaw managed to crash over to extend Hornets’ lead, converted by Josh Jordan-Roberts.

Keighley hit back on the 20th minute as Taylor Prell made a break from deep inside his own half and found Alfie Seeley in support to score under the sticks for an 8-10 scoreline.

Minutes later, experienced half-back Scott Murrell spotted the gap to go through and score in the corner to give Keighley a 12-10 lead.

Penkywicz was proving to be one of the best hookers in the competition once more as his short ball found Gavin Bennion to crash over and restore Hornets’ lead on the 31st minute with a 12-16 scoreline.

It was Penkywicz again who was causing the Keighley defenders some trouble, and following his dart from dummy-half, Rob Fairclough’s kick found an unmarked Shaun Ainscough to score in the corner for a 12-20 score.

Fairclough then kicked a drop-goal on the half-time hooter to give Hornets a 12-21 lead going into the break.

Hornets went into the second half without Bennion and Zac Baker, who both left the field with injuries. However, it was Fairclough who opened the scoring in the second 40, crossing for his first for the club just minutes in for a 12-27 score.

Jordan-Roberts soon joined the try-scorers list, assisted by Forshaw, before Moimoi also scored his first for the club to extend the lead to 18-37.

The hosts threatened a comeback and came within one point with minutes left thanks to back-to-back-to-back tries from Aaron Levy, Charlie Graham and Miller for a 36-37 score.

With minutes remaining, Declan Sheridan featured from the bench to assist Ainscough in the corner and confirm the two points for Hornets.