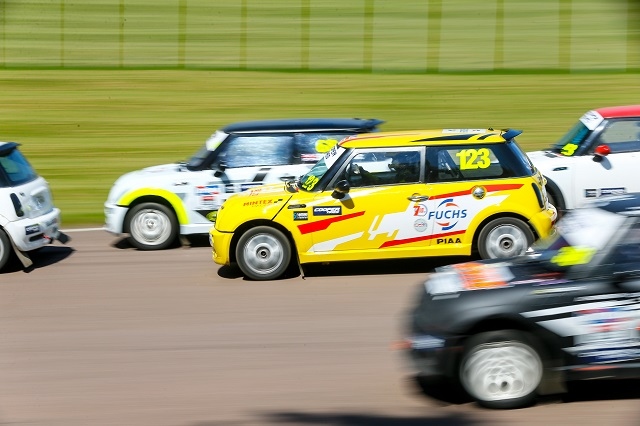 BMW MINI racer Steve Brown enjoyed a positive start to his return to the Motorsport UK British Rallycross Championship 5 Nations Trophy Presented by Cooper Tires last weekend, scooping a solid result at the opening two rounds of the season at Lydden Hill (30-31 May).

The Rochdale driver made his comeback to the ultra-competitive single make formula after a years sabbatical due to the pandemic and lined up against 17 other competitors in equal machinery all eager to get their season off the best possible start at the Kent circuit.

Brown endured a tough start to his weekend but recovered strongly to take sixth and fourth place in the first and second rounds respectively.

The Fuchs Lubricants backed MINI pilot was eager to build on his previous experience in the series which saw him make the switch from stage rallying to the circuits in 2019. His debut season on the British Rallycross tour saw him take third overall in the championship but with a packed grid, it would be a tough ask to repeat his podium success this time around.

The weekend offered up two points-scoring rounds with Sunday hosting the opener and Bank Holiday Monday making up the double-header weekend. Brown’s return to the driver’s seat was a tough one thanks to a poor start on the opening heat of the weekend saw him leave the line in last place. A blistering recovery drive saw him take fifth in the opener and a much-needed confidence boost for the remainder of the day.

An impressive drive in the second heat would see Brown led the chasing pack through the entire session before a dramatic belt failure in the BMW MINI’s engine on the final tour of the circuit saw him drop out of the lead and tumble down the order to last.

That would leave an uphill battle for the remainder of the day, but Brown accepted the challenge – winning the semi-final in fine style. Despite the issues of the day and an average starting position for the final, he enjoyed a solid and trouble-free race to secure sixth place in the opening round of the season.

The second counter of the season came on Monday and Brown would be aiming to stay out of trouble to maximise his first-round score. Without the technical issues that befell the MINI the day before, Brown was able to enjoy a much cleaner run through the heats and Semi’s to once again line up in the final.

As the confidence grew, his lap times and race craft improved to land him with fourth place in the final, just shy of the podium positions on his first weekend of the season.

“It’s been fantastic to finally be back out in the car competition again and to have such a positive start to the season is really encouraging,” said Brown.

“I think this time in 2019 I didn’t even score any points so to come away with a sixth and fourth place is superb, especially when I know there is more to come from me and the car. We had a few issues throughout the weekend which held us back a bit, but the main thing was that I manage to work around those and get some important results on the board. It’s a long season of course, but even at this stage regular solid points are really important and it’s a great start to the season. It’s been a very positive weekend all round.”

Brown now sits seventh in the BMW MINI series standings as the championship heads to Northern Ireland in July at the Mondello Park circuit.