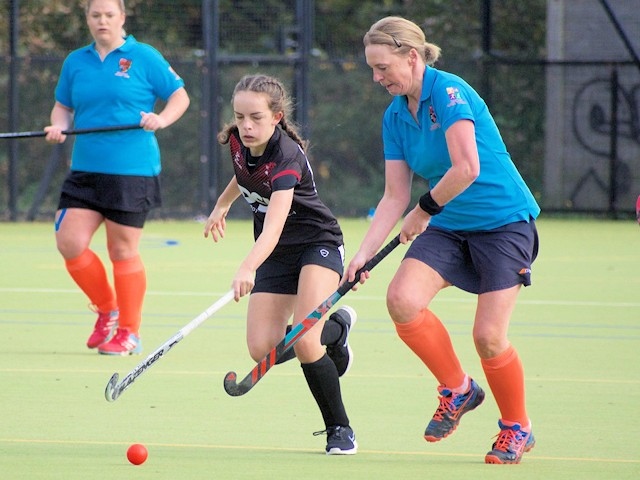 Player of the match was Paula McDonald (right)

Rochdale hosted Bolton Ladies 2nds on a warm, humid Sunday at the end of an unusually rainy May.

Despite the cloying heat, both teams quickly got stuck in. Hodcroft and Pickering expertly worked their way down the right wing with the ball before crossing it into Bolton's D where Yates was running in. She took one tap to control it before lifting it just high enough to go over the keeper's foot and securing an early lead for Rochdale.

Bolton tried to launch a counter attack, but with Collinson, S Ransome and McDonald working hard defensively in the midfield it was almost impossible for them to find an opening. On the occasions that their opposition did get through, Knowles, Owen and Palmer were there to tackle, block and mark out the attacking players, with Partington skillfully saving the few that got to her.

A clearance from Rochdale's defence lead to some excellent midfield play. Using their signature triangle passes to make the ball do the work for them, Hodcroft, McDonald and Pickering drove the ball up the right wing again, where it was crossed into the D, where Yates collected it and passed it to Burrell who was ready at the far post to knock it into the back of the goal.

Undeterred, Bolton yet again tried to bulldoze their way through Rochdale's left wing, but Moon was just as determined to hold them outside of the D, channeling them away from any danger before securing the ball and sent it back down the wing where S Ransome and Yates were in space, working together to work their way into the D only for Bolton's defence to deny them any reward for their great play.

After persevering in the midfield, getting pushed back for every small gain they made, Bolton finally managed to find a way through to Rochdale's D. Their player took a shot at the top of the D and despite a fantastic effort from Partington it came off her foot but not enough to stop the goal.

After S Ransome hustled on the left wing to reclaim the ball for Rochdale, she passed it across to Hodcroft who weaved her way to the top of the D, hitting it just slightly too early. Yates attempted to get her stick to it but the Bolton keeper's kick blocked any opportunity.

Back in possession of the ball, Bolton went back on the attack. They had their work cut out for them as Collinson and McDonald put in the leg work in the midfield to intercept their passes. Bolton eventually found a way through, but Owen was ready and won the ball back easily and hiked it back up the field. It was an unsuccessful gambit, but when Bolton regained possession, the rest of Rochdale's defence had it covered, and Partington gave another demonstration of her abilities with another great save.

Banks saw an opportunity to further Rochdale's lead when she received the ball high in the midfield, and made a run towards the top of the D where she slammed it in down the left post from the top of the D.

A Bolton charge down Rochdale's left wing caused some worry, despite some excellent work from Knowles channeling them out, they were able to pass it across the D, where Owen was ready to stop them, but they passed it back before crossing it to their player on the far post. Rochdale's defenders had made the angle awkward and Rochdale's work was rewarded when the opposition's deflection went outside the post and safely off the back line.

Another attempt by Bolton to find another goal was foiled by Rochdale, as J Ransome showed the benefit of fresh legs as she got stuck in to cover when the defence had pushed up to help their midfield and strikers. Rochdale tracked back well and were soon making another attempt on goal, only for their opposition to show off their own defensive skills.