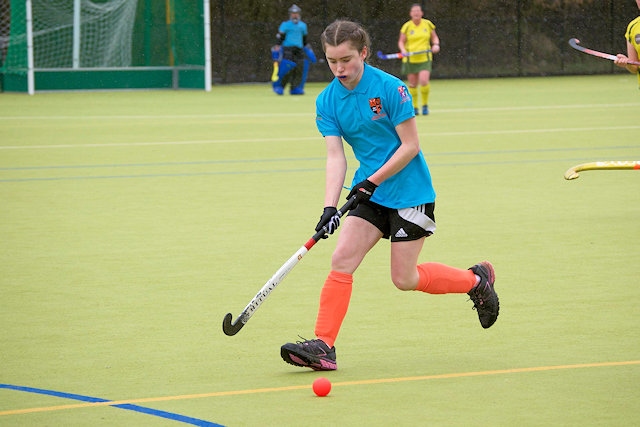 This weekend Rochdale hosted Urmston Ladies 2nds on a very warm, very sunny day. Due to the heat both teams agreed to play quarters to allow for plenty of water breaks.

With the conditions as warm as they were, Rochdale made the decision to make the ball work for them, and it was a tactic that paid off. They were able to use their passes to open up space for their plays whilst conserving their energy in the heat for when it mattered.

The opening goal came, after Mongan intercepted an Urmston break. She hit the ball to Knowles in the centre, who guided it on to Pickering on the right wing. She took the ball all the way to the baseline before pulling back up again and crossing it in the D where Yates thwacked it into the back of the net.

After a successful tackle, Palmer passed the ball to Collinson, who redirected it up to Yates. She weaved her way down the centre of the pitch as she dodged the opposition and into the D, pulling to the right and hitting it across the D where Burrell had run onto the far post to deflect it in around the keeper.

Rochdale were dominating the game and a long corner taken by McDonald was passed between Knowles and S Ransome as they made their way around their opposition, passing it to Hodcroft who took a shot only to be stopped by a defender. Pickering intercepted the attempt to clear it and after a brief tussle over the ball, eventually nicked it over the line for a goal.

After intercepting the ball and running it down the wing S Ransome realised that Urmston were completely blocking her path, so she pivoted and hit it back to Mongan, who switched the play via Collinson and Palmer to the right wing. Pickering drove it down the pitch before passing it off to Knowles who received it just outside the D and took her shot just as she passed into it, only for the keeper to get a glove to it and make the save.

Urmston managed to find enough space and a burst of speed to make a break on Rochdale's goal, however Rochdale had tracked back with them, and were able to hold them just outside the D, and forced them to switch around to find an opening. A sideline ball gave Urmston the opening they needed to get into the D, but Rochdale's defence were able to mark their players out to make it an easy save for Partington, and allowed Owen to clear the ball back up the pitch.

Rochdale made it 3-0 when a long corner from S Ransome was passed square to Knowles who lifted the ball just high enough to clear the sticks of the players in her way to pass it off to Yates, who instinctively directed it to Hodcroft to make use of the better angle. Hodcroft didn't hesitate to take the shot and claimed a goal.

After another well defended Urmston attack, Owen took a free hit and easily found Hodcroft in the centre ground. Hodcroft turned and weaved her way between the opposition as she hurtled down the pitch, before arriving in the D and taking her shot to land the ball in the top corner, and making it look easy.

Urmston made a break down the left wing, and despite some excellent marking and tracking, they were able to get into Rochdale's D. A battle for the ball at the goal post ensued before it eventually hit a foot to give Urmston a short corner. Rochdale defended it well, with Collinson running to block their passes, allowing Owen to clear it back into the midfield. Where some excellent work from Knowles, Pickering and J Ransome got the ball back into Urmston's defensive area, only for it to go off the back line.

The third quarter was brought to a dramatic end, when an accidentally lifted free hit from the Urmston defence caught S Ransome on the head. Play was halted whilst she was checked over, after which she was back on her feet, though not allowed to resume playing.

At 5-0 to Rochdale, a long corner from McDonald came back to Collinson who drove it towards the top of the D before passing it off to the left wing where Knowles had run into some space. She crossed it into the D where Burrell was able to pick it up and quickly push it over the line for another goal.

Another defence hit found Pickering, who made her signature run down the right wing, before launching the ball into the D, where the Urmston defence tried to stop the ball as it bounced off numerous sticks, the goalie got a foot to it, but Yates had her stick down and wasn't budging. After a brief struggle, Yates managed to turn and pass it off to Burrell who tapped it in.

Captain Knowles said: "A brilliant game, thank you ladies for turning up each week and delivering results.”