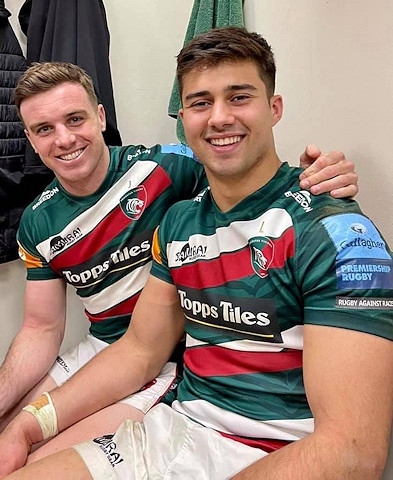 Head coach of the England national team, Eddie Jones has named a 34-player training squad ahead of England’s preparations for their summer series – with Rochdale’s Daniel Kelly being one of them.

Inside centre Kelly is the only teenager named in the latest squad.

Daniel started playing rugby at Rochdale at the age of six and is currently playing professional rugby union in the Rugby Premiership with Leicester Tigers.

Daniel’s father, Daniel Kelly (senior), a coach at RRUFC, said on behalf of the Kelly family: “We are very excited and truly delighted by this news. We could not be prouder of what Daniel has already achieved in his career to date.

“We are thrilled by the further opportunity we hope this presents, going on to play at the very highest level and compete with the very best.

Rochdale RUFC chairman Iain Coates said: “This is fantastic news for Daniel and very well deserved. Daniel is the epitome of what hard work, dedication and keenness to play can achieve.

“He is a shining example of the quality of coaching and rugby education that the hundreds of local youngsters enjoy from the dedicated volunteer coaching staff at Rochdale when playing every week in our Mini and Juniors section. He is also a lovely lad who helps us at Rochdale whenever asked.

“On behalf of all at Rochdale RUFC we send our congratulations and wish him every continued success, both in the coming months with the England squad and in his future rugby career.

“This goes to show that our young players dream of playing at the highest level really can come true.”

Founded in 1921, RRUFC is an RFU accredited, amateur rugby union club based at Moorgate Avenue, Bamford, Rochdale. The club provides rugby facilities for players of all ages and backgrounds.

Ahead of their 100th anniversary this year, the club has launched a crowdfunding page to help them bounce back from the effects of Covid-19. The crowdfunder - Rochdale Rugby Recovery Fund – aims to recover, rebuild, recruit, refresh and return the local club to the ‘happy place it has been for the last 100 years’.

Former player Daniel Kelly has helped to spread the word and encourage people to donate to the fundraiser through a personal video.

Mr Coates commented: “As the club prepares for its 100th anniversary this summer, this is absolutely wonderful news and a tremendous way to kick off our celebratory centenary season.”