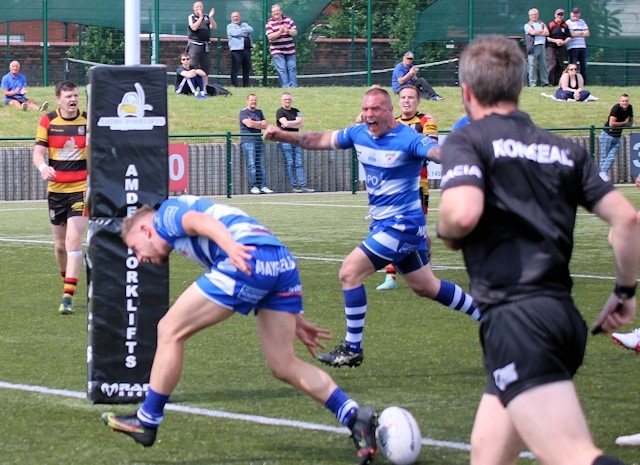 Mayfield failed to live up to their potential again on Saturday as they lost out to in form Pilkington Recs at the Ruskin Drive Sports Ground.

A strong opening 15 minutes gave the Mayfield travelling support hope. Sam Butterworth's side started with a plan and stuck to it, until the Pilks number 7 took hold of the game. He took the ball on what was their first attack of the game and ghosted his way through the line to score a great individual try, the conversion made it 6 - 0.

Mayfield hit back though and attacked the Pilks line, repeat sets put the pressure on the home side but Mayfield failed to capitalise. The home scrum half caused more problems and instigated their second attack which resulted in his second try. 10 - 0.

This wasn't a fair reflection of the game but if you miss tackles, you pay the price and that's what was happening, another home score meant that Pilks had had only had three attacks and yet they had managed to score three tries 16 - 0.

The introduction of Nick Hargreaves gave the Mayfield side some much needed steel as he showed his team mates what was expected of them. He ran straight and hard and was uncompromising in the tackle. he was also unlucky not to get his side on the scoreboard after being held up over the line.

Mayfield pulled it back together, following Hargreaves lead and were soon chalking up a try from Harry Macdonald after a great rampaging break from big Gee DeSouza, Cole Connolly converted, 16 - 6.

They were unlucky not to cut the deficit even further before half time but a strong defensive effort held them out. The Pilks number seven again put Mayfield to the sword, this time turning provider, showing electric pace as he put his second rower through the gap to make it 22 - 6 at the break.

A rousing half time speech from Rob Kershaw prompted Mayfield to come out and go straight on the attack, unfortunately Pilks hadn't read the script and they intercepted on the last tackle to race away and extend the lead in the first minute. Tries were traded in a proper end to end game with Mayfield's coming through Jack McConnachie who latched onto a clever Aidy Gleeson kick.

At 32 - 10 Mayfield were all but out of it but Hargreaves and Jackson Kelly had other ideas. They refused to lie down and went forward at every opportunity. This lifted the spirits of their team mates and they were soon pushing to get back into the game. they very nearly did after another good break from the ever improving Ollie Coleman but the ball went to ground with the line wide open. Undeterred they kept the pressure on and were rewarded with a good score from Liam Donnelly and then the try of the game after a Connolly break saw him ship the ball to Kershaw who through a speculative pass which found the supporting Coleman who went under the sticks, Connolly converted both, 32 - 22.

Mayfield were in the ascendency now and the next try was always going to be crucial, Kelly, Donnelly and DeSouza worked hard while Joe Schofield and Brad Gartland defended well. Unfortunately for Mayfield a couple of missed tackles again gifted tries to the opposition and Pilks capitalised as they had all game.

The final score 44 - 22 definitely flattered the home side as Mayfield showed that they were not that far off with this performance. Pilks seized every opportunity and made the most of each chance handed to them, but again Mayfield showed that with a bit more polish and a little more luck they will turn this season round and win more than they lose.

Best on the day for the Rochdale side was Hargreaves and he was well supported by Kelly, Donnelly, Connolly and Coleman.