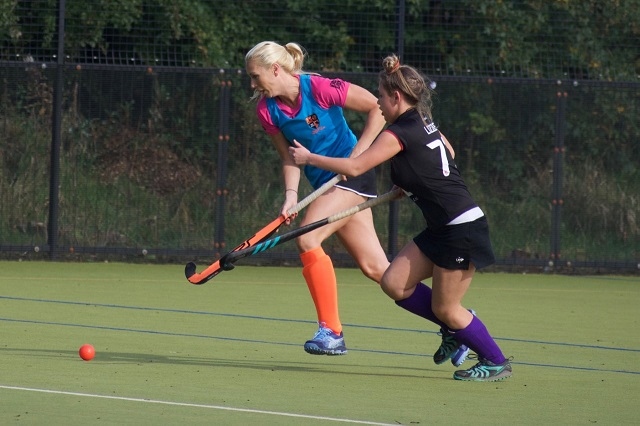 Gemma Hodcroft (left) was named player of the match

This weekend Rochdale had their last away match of the mini-season, against Didsbury Northern Ladies 6s. What looked like an overcast, cool day - perfect hockey weather - transformed into glorious sunshine about ten minutes before pushback, resulting in another very warm match.

Rochdale started strong, pushing deep into the Didsbury defence and holding there, with Collinson, Mongan and Palmer doing some good switching work to hold the play in their opposition's half of the pitch. Rochdale were awarded a number of short corners but unfortunately none of them provided the goal they were seeking; even when they tried changing their short corner technique by injecting the ball from the other side they were unsuccessful. They were up against a very strong Didsbury defence.

Rochdale made another push forward, with Knowles and Hodcroft doing some good work, but Didsbury were able to block them out and steal the ball back. S Ransome quickly regained control of the ball on the left wing, tackling and running up to try and find a way into the D. As the opposition moved to close her down, she made a precision pass across to Yates in the D, who hit the ball into the goal.

Didsbury attempted to return the favour, but Owen and Mongan blocked them out so that when the ball strayed into their D, none of the opposition were near enough to it to cause any bother. Keeper Partington kicked it off to the side to get it away from her goal which allowed the defence to set up and close down any further attempts.

A free hit from Owen found McDonald in the centre ground, who passed it off to Pickering on the wing. After a quick run she crossed it to Knowles at the top of the D who took a shot, it was saved but rebounded off a foot into open space. Knowles ran in to take another shot, but she didn't have a clear line and it went wide.

On a fresh attempt on goal, Rochdale won another short corner, and yet again McDonald injected, this time it went straight to Collinson who had pushed up to provide back up. She ran straight in and took a shot at the top of the D and slammed it into the goal to give Rochdale a 2-0 lead.

Didsbury charged back down the pitch, and were made to work for it by Mongan, Collinson, Owen and Moon, but they finally managed to get into the D. After a slapdash effort where everyone was trying to jab at the ball near the post as Partington tried to keep her foot in the way, it finally lifted high enough to get through, getting Didsbury on the scoresheet at 2-1.

After intercepting an opposition pass, Moon hiked the ball over to Hodcroft who dashed around a couple of Didsbury players to cross it to Knowles in the D. Knowles took a shot but the keeper saved it, Newton quickly nabbed the rebound and tapped it back to Knowles who was able to nudge it into the goal from post.

Collinson reclaimed the ball with a sharp tackle on a Didsbury runner, and passed it off to S Ransome, who in turn hit it to McDonald. She was free to move into space and cross it into the D, where Knowles had run in and was able to pick it up to hit it into the right-hand corner of the goal.

A free hit from Owen found Pickering on the right wing. She drove it down the pitch and switched it to Hodcroft when the opposition tried to channel her out. Hodcroft crossed it to the far post, but unfortunately Newton couldn't deflect it far enough to get the goal, and it went just wide.

Collinson managed to intercept a Didsbury pass that was bound for Rochdale's D, but unfortunately the spin on the ball meant that she couldn't control it and Didsbury were faster to reclaim the ball behind her and were able to use it to score.

Determined to make use of their possession of the ball, Rochdale went back on the attack with Hodcroft weaving through the players trying to mark her, before handing it off to S Ransome to run it down the left wing. She then crossed it into the D where J Ransome received it and passed it on to Yates, but the Didsbury defence proved too strong and even with Knowles and Pickering running in to assist they were unable to find a way through to secure a goal.

The match closed out in the same way it started, with Rochdale deep into the Didsbury defence and creating multiple chances that were too well defended to capitalise on.