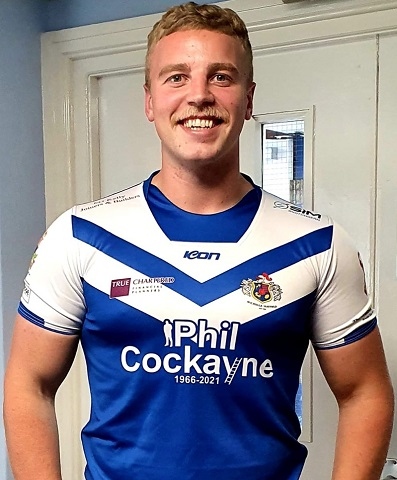 Having played rugby professionally and as an amateur, Phil sadly died suddenly earlier this year at the age of 54. He was also a popular and familiar face on Oldham Road where he had a window cleaning round for many years.

After Phil’s death during lockdown, his family and friends wanted to do something to honour him – a balloon release in his memory saw at least 500 people turn out to pay their respects, unable to have attended his funeral due to the restrictions.

Phil’s loved ones decided to raise money and become the main sponsor of the Mayfield youth section which had its first outings last weekend, working closely on the design for the shirts with the club.

Phil is commemorated with a silhouette, his date of birth and date of death, plus a ladder in a nod to his window cleaning.

Phil’s son, Jack Ashworth, 25, who came through Mayfield and now plays for the Huddersfield Giants, said: “One of dad’s friends, Marvin Connolly suggesting sponsoring the youth team. Dad, myself and my three brothers played at Mayfield, and it felt like the right thing to do.

“Marvin made a generous donation, as did Newhey Lodge which knew dad well. We put some money in too, and mum asked for donations to the youth team instead of birthday gifts.

“Dad would have a grin on his face if he could see the top; the design is brilliant. We’ve had so much help off everyone at Mayfield and we can’t thank them enough. I’m really looking forward to seeing the youth section playing and seeing my dad’s name on the chest of their shirts.”

The shirts also feature the new Mayfield crest, which incorporates the mustang synonymous with its youth section, plus the Lancashire Rose – with usage approved by the College of Arms – bringing everyone together in the same kit for the first time.

Rounding off the crest is a rugby ball, the hung lamb of Rochdale, plus the red, white and blue colours synonymous with Rochdale Mayfield.

Dr Ian Sampson, of Rochdale Mayfield Committee, said: “Phil’s family are really happy with the tribute and so are we; it’s a lovely way to remember Phil. We’re really proud of our productive youth system, which has produced so much talent.

“The new crest is a message of unity and heralds a new era at Rochdale Mayfield as a fresh new committee look to steer the club to meet its full potential and strengthen links with the community.

The Mayfield youth teams showed off their new kit at the weekend, looking smart and playing some fantastic rugby across all age groups.