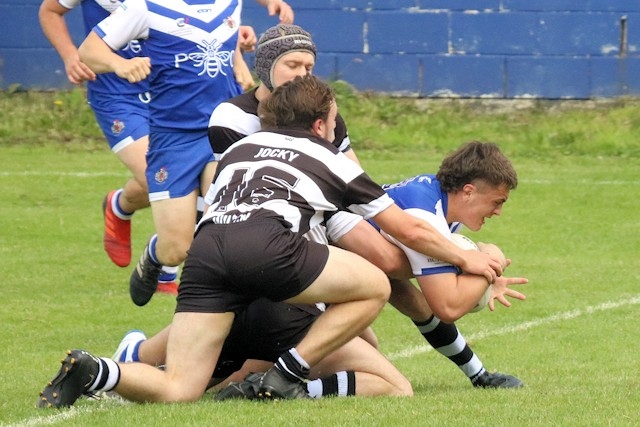 Max Wood scored the final try for Mayfield on his debut

Mayfield welcomed Saddleworth Rangers to Rochdale on Saturday 10 July for what turned out to be a proper game of two halves. Mayfield were patchy at best in the first half but clicked into gear in the second.

A great start saw Mayfield's Si Moore go over for a try in the first minute and Cole Connolly converted.

Saddleworth came straight back and only excellent defence from Connolly and Liam Whalley, on his return, kept them at bay. It didn't take long though for the mistakes to creep in and Saddleworth got on the scoresheet through their big centre out wide, 6 - 4.

Lost possession and cheap penalties gave the visitors the chance to go in front and they took it gladly. At this point it could have gone either way, but Mayfield knuckled down and started to play some open expansive rugby. This lead to Whalley crashing onto a smart pass and breaking through to score, Connolly added the conversion to give Mayfield the lead again at 12 - 10.

Saddleworth made mistake after mistake and Mayfield should have gone further in front but failed to capitalise until a perfectly timed pass from Zac Hartley put Liam Donnelly through the gap. Connolly again added the extras and then Whalley notched his second try just before half time to give his side a healthy 24 - 10 lead at the break.

A shaky start to the second half from both sides meant that the next score was crucial. Luckily Ollie Coldman was the one who got it after some great skill from the Mayfield side. Saddleworth weren't done yet though and managed to narrow the gap with a well taken try in the corner, 28 - 14.

Liam Whalley, Si Moore and Cole Connolly knocked lumps out of the Saddlworth attack with some ferocious defence. This took the sting out of the game and Mayfield took complete control with Zac Hartley bringing his players onto some great passes, Jack McConnachie and Jake Castree benefitted from this as they made their side's lead unassailable. Hartley converted both tries to make it 40 - 14.

Mayfield were now playing really good rugby and throwing the ball about freely. The biggest cheer of the day came when Max Wood on his open age debut, showed great strength and determination a he powered his way over the line for the final try, again converted by Hartley. 46 - 14.

This was by far Mayfield's best performance of the season. Apart from a wobble in the first half they never really looked like losing this game. They looked strong in defence and creative and confident in attack. returning players Whalley, Ieaun Higgs and Mark Biggins made a real difference and gave the supporters something to look forward to for the rest of the season.