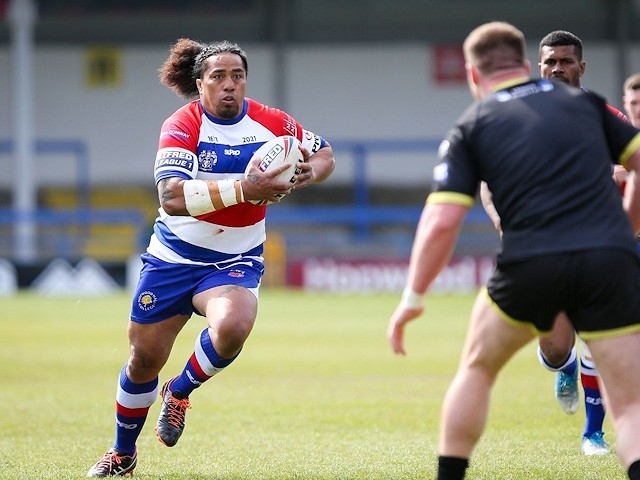 Fuifui Moimoi was named as man of the match

Rochdale Hornets made it three wins on the bounce with a 18-30 victory away to West Wales Raiders on Sunday 11 July.

Hornets made the long trip without 14 first-team players, including last week's man of the match Lewis Sheridan, who tested positive for Covid-19 during the week.

Sam Freeman returned from injury and was named at fullback, while Joe Taira also returned to the starting XIII.

For the first time ever, four Welsh match officials took charge of a professional game for the clash with West Wales Raiders.

Sean Penkywicz opened the scoring on the ninth minute, as the skipper crashed his way over close to the line thanks to a smart show-and-go. Six minutes later, Ieuan Badham was shown a yellow for a high shot in the middle of the park.

Freeman made it 0-8 on the 16th minute, forcing his way over to extend the lead, Josh Jordan-Roberts unsuccessful in both conversion attempts. A chance went begging just two minutes later, as half-back Danny Yates sliced through the Raiders' defence, but his pass to Zac Baker in support was ruled forward by the official.

Former England students international Lee Registe returned to the field and made his way onto the wing on the 22nd minute.

Luke Fowden was next to score for Hornets as things looked positive, as the powerful forward did it all himself to crash over under the sticks. This time, Zac Baker converted for a 0-14 score.

Callum Merrett replied for the hosts three minutes before the half-time break on his Raiders debut, converted for a 6-14 score.

Raiders were on the front foot early in the second 40 as Jamie Murphy scored just three minutes into the restart, converted for a close 12-14 score.

Fuifui Moimoi, who was nominated for the club’s player of the month for June with three tries, added another on 58 as he powered his way over thanks to smart play from Ben Moores. The try was converted by Baker for a 12-20 score to add some breathing room for Matt Calland's side.

Second-rower Callum Marriott scored five minutes later, flying over thanks to a short pass from Penkywicz from dummy-half. Baker added the extras for a 26-12 score, but the game continued to be close and Raiders, who went into the clash winless so far in 2021, showed good signs on home soil.

Daf Phillips replied for the hosts on 68 minutes, finishing in the corner for a tense finish at Stebonheath Park.

Hornets came close to adding another as Dan Nixon jumped highest to collect a kick on the last, but Forster was forced into touch after finding himself with the ball thanks to his wing partner.

Another Hornets player could be facing discipline actions, as Marriott was shown a red card for a high shot minutes from full-time. Baker is currently awaiting tribunal hearing for his yellow card against North Wales Crusaders.

Raiders came close again in the corner that could have made it a two-point game, but Hopwood Hall academy product Nixon secured the win with another acrobatic finish in the corner on 79 minutes for a 18-30 victory.

Man of the match was 40-year-old rugby league legend Fuifui Moimoi, who gave another powerful performance and continues to show why he was a solid transfer for Matt Calland's side in 2021.