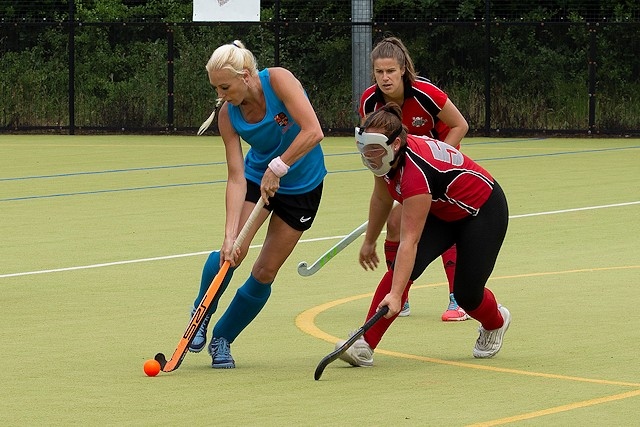 Player of the match was Gemma Hodcroft

This weekend Rochdale had their last match of the mini-season, at home against Stockport Bramhall Ladies 3s. As the first and second placed teams in the table, it was all to play for.

With no substitutes available, Rochdale's game plan was to keep things simple, and use their passes to make the ball work for them rather than the other way around.

The first goal came from a short corner awarded to Stockport, who managed to lift it into the top corner of the net. In retaliation Hodcroft received the ball from the push off and hurtled down the field and around any opposition players she encountered before she crossed it into the D where Newton had run onto the far post, but her deflection went just wide of goal.

Collinson was able to intercept Stockport on a fresh attempt to drive play back into Rochdale's defence, and passed it off to Hodcroft, who gave it to Knowles on the right wing. Knowles ran it down before passing it into the D where Burrell was able to receive it. She rolled it out and around the defender in her way, but the keeper saved it, only for Hodcroft to nab the rebound and hit it into the net.

A short corner in Rochdale's favour gave them a good opportunity to pull into the lead. McDonald injected the ball to Hodcroft, who ran in to take a shot, but was intercepted by a Stockport defender. Collinson was able to pick up their attempt to clear the ball and passed it down the line to McDonald but the keeper was able to make the save.

Stockport managed to break through despite being channeled out down the right wing, to land another short corner themselves. Yet again they were able to utilise it to gain themselves a second goal.

For a while Rochdale were able to hold play in the centre ground, intercepting Stockport's play and passing around them, before Leech received the ball on the left wing. She raced down her wing to the far end of the pitch, passing the ball off to Newton when a defender tried to stop her. Newton was able to pass it back to Leech as she entered the D for a shot. Stockport's keeper saved it, and before anyone could claim the rebound, one of their defenders cleared it.

Stockport's next offensive travelled down Rochdale's left wing, with Mongan and Owen doing an excellent job at holding their opponents at the edge of the pitch and away from their D. Eventually, Stockport managed to find a way through to switch the ball around the back and to their free players on the other side of the pitch to make use of the open space. One of their strikers took a shot just outside the D, but another Stockport player was able to get a touch on it inside the D to deflect it away from Partington's predicted save and make the goal stand.

After Stockport regained control of the ball from Rochdale, Owen surged forward and swiped it from their player with a precise tackle before propelling it up the field to Burrell. She and Hodcroft got into the D with some excellent quick passes between them, but with Stockport's defenders pairing up to channel and tackle each player, neither had a clear shot before they lost possession.

Despite some excellent channeling and tackling work from Rochdale, Stockport managed to work their way back into their D again for another goal attempt. Partington made an excellent save that allowed Collinson to clear it up to Newton - who had swapped onto right wing for Knowles - who drove it up the wing, winning a free hit when an opposition player tackled her and knocked the ball off the sideline. Knowles took it and worked with McDonald to get into the D, the strike was saved, and Leech and Hodcroft both made valiant efforts to make the rebound count, but were ultimately outmanoeuvred by the defence who cleared the ball away.

Stockport won another short corner, but this time Rochdale had figured out their tactics and were able to clear it away. However, Stockport tackled to retrieve the ball and were making another attempt. They were held off at the top of the D briefly, before they were able to take a shot that Palmer caught with her stick, only for it to deflect up into the goal.

Rochdale hadn't given up yet, however, and went back on the attack. They won a short corner, and McDonald injected the ball with Hodcroft receiving it, she ran it in before passing it to Newton on the post. Unfortunately the keeper had seen her and made the save, Knowles managed to pick up the rebound, but a defender blocked her out before she could take her own shot, before Stockport were able to clear the ball away.

The final score was 1-5, with Hodcroft (1) as the Rochdale goal scorer..