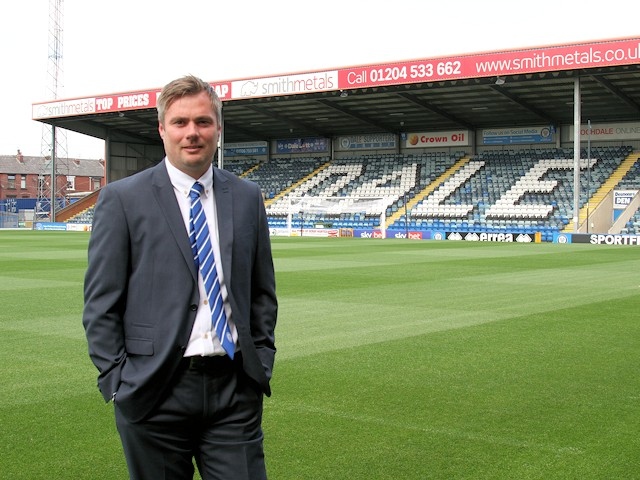 Robbie Stockdale, the new manager of Rochdale AFC, has outlined the club’s promotion as his target for the forthcoming season.

After a seven-year stay in League One, Rochdale were relegated after finishing 21st last season, just one point from safety.

Stockdale was appointed the Dale’s new manager on Saturday 10 July after the departure of Brian Barry-Murphy.

Speaking to Rochdale Online on Tuesday (13 July), he said that his aim for the season was promotion: “– I’ve told the players our aim has got to be promotion, whether that’s through playoffs or automatic: I’m not afraid to say that!

“Every team, every manager will be thinking the same thing as me. I accept that I may have set myself up for a fall, but I’ve come to win and I want the players to accept that challenge as well.”

Noting that the loan market would be a “major part” of his recruitment, Stockdale continued: “We’ve got good quality players and we need to add to that.

“My job now is to get the right players in the positions we need and I urge the fans to have a little bit of patience with that.

“[Our training sessions] have enhanced that there are some really good characters at Dale, and all of them are absolutely at their max in terms of the work rate – which is what I’ve asked for. I’m pleased with what I’ve seen in terms of attitude and application.

“Drive and the right attitude are the most important things. Ability gets you in the building but attitude keeps you there. We’ll be recruiting players as best as we can on a number of things, but attitude and character are quite high on the list.”

He added: “I feel a very big responsibility to the club; how it’s set up to get the right players in.

“I want to be accessible to supporters as well, I think that’s really important. If they feel part of the process, that could be a really powerful thing.

“The players represent the club that represents the fans, so you need to see somebody on a match day that is a hundred percent committed. If you see that – then win, lose or draw – you go out satisfied that they’ve given their all.

“We want fans to come to games and enjoy themselves and [for us to] play entertaining football and be difficult to score against.”

He added: “Robbie really stood out. We wanted a young guy who was hungry, ambitious, someone who really wants it. That came across in abundance straight away.

“He’s such a credible coach at a higher level and has that much respect from higher above, I think clubs would be happy to send their younger players here because they know the standard of coaching.”

Rochdale’s descent into League Two means Stockdale’s side joins local rivals Oldham and Salford City – who Rochdale’s second highest all time goal scorer Ian Henderson signed for in 2020 – plus the manager's former team Tranmere Rovers. Stockdale made 80 appearances for Tranmere during 2006-2008 before retiring in 2012.

Dale is also joined in the League Two ranks by Hartlepool and Sutton United, both of which were promoted. Whilst Dale has faced Hartlepool 130 times over the years, the 2021/22 season is the first time they will be in the same division as Sutton.

Rochdale will also meet Barrow in the league for the first time since 1969, although they have clashed during a cup match.

Rochdale’s season begins on Saturday 7 August with an away fixture at Harrogate and the team will play two friendlies at home this week, against Fleetwood on Saturday 17 July and Rotherham United on Tuesday 20 July.

These will be the first fixtures that fans will be able to attend since March 2020 and tickets must be purchased in advance - there will be no sales in-person or over the phone on the day of the game. There are no longer any cash turnstiles in operation at the Crown Oil Arena due to a bar coded entry system now being in place.