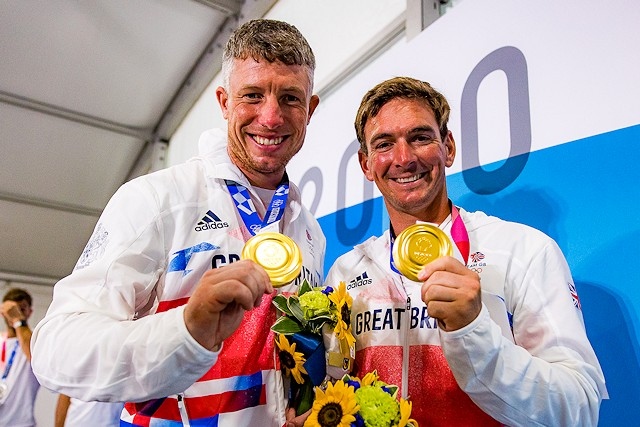 Stuart Bithell (left) and Dylan Fletcher with their gold medals

Rochdale sailor Stuart Bithell snatched sailing gold by just centimetres in one of the most dramatic Olympic regatta races of all time.

Alongside partner Dylan Fletcher, the 34-year-old claimed a dramatic men's 49er gold medal at the Tokyo 2020 games on Enoshima waters on Tuesday (3 August).

This is the first ever 49er sailing gold for Team GB, with the duo taking home the win in the space of just 57 minutes, narrowly edging out Germany and New Zealand by centimetres at Sagami Bay.

The British 49er crew held off their German rivals by just fractions, the lead continually changing hands in a drag race to the finish line.

A complex formula of results meant the British crew had to finish two places ahead of the six-time world champions to win, with the Kiwis’ third place meaning they settled for silver as Team GB won gold.

Up until late 2016, Stuart Bithell and Dylan Fletcher were rivals on the water before deciding to team up for Tokyo.

The decision brought immediate victory, as the pair scooped world titles and the European gold and silver on home waters, before the ultimate Olympic victory on Tuesday.

Bithell previously won a silver medal in the 470 at London 2012 with Luke Patience, however he nearly called time on his career when he was pipped to Rio 2016 selection by his fellow gold medallist Fletcher.

“Dreams come true kids. I’ve certainly never seen a race this close in the Olympics, not in the 49er class," said Bithell.

“It must have been thrilling to watch, it was terrible to be in.

"Dylan talks about it being a long road since Rio but for me it's been nine years.

"I missed out last cycle to Dylan, so it's been a long part of my career just really chipping away and working hard. This is my last Olympics, almost certainly.

"As you can imagine it's so nice to come away with the gold, it's been the dream since when I was a little boy."

“Everyone always knew he was an exceptional sailor and even during his time studying Sport at the college he was competing internationally as a junior. His classmates even gave him the nickname ‘Skipper’.

“He was a fantastic student and was popular with both staff and his peers. We’re so pleased he’s gone on to achieve greatness after displaying so much talent at Hopwood."

Sailing’s Team GB claimed a second gold on Monday as Giles Scott win gold in the men’s Finn class, with the final races for all three competitors described as ‘two of the most dramatic races in the history of Olympic sailing’.