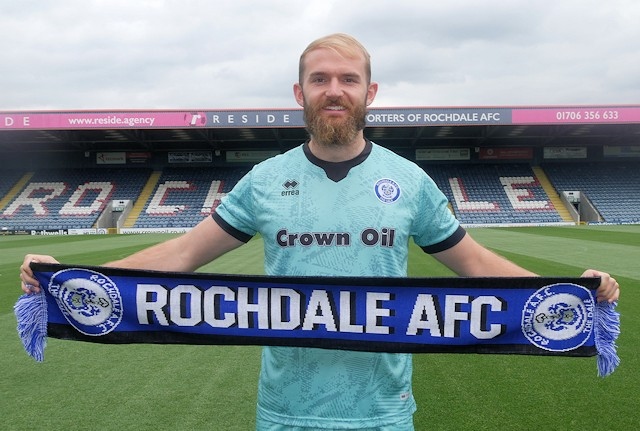 Robbie Stockdale has added goalkeeper Joel Coleman to his squad ahead of the start of the new season tomorrow (Saturday 7 August) at Harrogate.

The 25-year-old, who left Fleetwood this summer, has signed a one-year deal with Rochdale.

Coleman is a graduate of Oldham Athletic’s Academy, signing his first professional contract with Latics in the summer of 2014.

He made 45 appearances for the Boundary Park club, before joining Huddersfield Town in the Championship in 2016.

A loan spell at Shrewsbury Town followed in the 2018/19 season before he signed a two-year contract at Fleetwood Town in 2020, which was mutually agreed would be terminated this summer.

“I’m so happy to get it done,” said Coleman.

“Hopefully I will play as many games as I can. I had an injury last season, but I want to put that to bed. I feel fitter than ever and can’t wait to get going.

“I know Jay [Lynch] is a very good goalkeeper and I don’t just expect to start. I’ve got to earn the right to play.

“I obviously respect him but ultimately, I do want to be the number one choice. Everyone wants to be playing, but I know I’m going to have to work hard for that.”

Manager Robbie Stockdale said: “I want competition all over the pitch and the goalkeeping position is no different.

“Jay has been very, very good in pre-season and I made sure he knew that, but I also mentioned that I need to bring some competition in for him.

“We can’t be going into the season with one senior goalkeeper. The younger goalkeepers, in my opinion, need to go out and play loan football first before I can consider them for League Two.

“Joel coming in provides that competition. He’s a very good goalkeeper and he’s got experience of playing league football.”