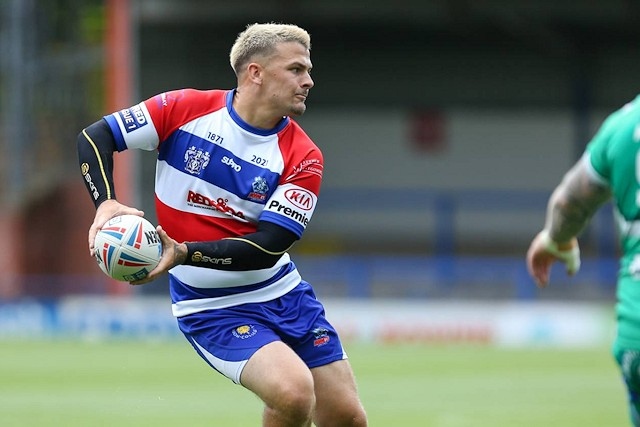 Luke Littlewood’s try on debut helped Rochdale Hornets secure a 34-38 victory against London Skolars at the New River Stadium in the Betfred League 1.

The squad saw multiple changes due to injuries and Covid. York trio AJ Towse, Myles Harrison and Toby Warren were all named in the 17 and Cian Tyrer, who joined the club during the week on loan from Newcastle Thunder, was also named at fullback.

Mid-week signing Tom Ashton also made his debut, named in the centres while Littlewood was named on the bench.

The hosts dropped the kick-off and Hornets were instantly on the attack, turning the early possession into points through Paul Brearley, who was named at stand-off for Matt Calland’s side. The try was converted by Reece Dean for a 0-6 lead in the first minute.

The start got even better as Dean broke the line just three minutes later and found Dan Nixon in support to make it 12-0.

It was a bright start for Hornets that got even better on the 12th minute, as back-rower Jordan Syme crossed under the sticks for his first try of the season, converted by Dean for an early 18-0 lead.

Shaun Ainscough produced a try-saving tackle on the 18th minute against his opposite number to force the mistake over the try-line, and four minutes later both Sean Penkywicz and Aaron Small were shown yellow cards by the official after a coming together on the pitch.

It got worse for the home side as Kameron Pearce-Paul was shown a red card on 25 minutes for tipping Ainscough onto his head on the tackle.

Despite being a man down against 12, it was Skolars who scored their first of the afternoon on the 33rd minute through Malikhi Lloyd-Jones, converted by Neil Thorman for a 6-18 score.

Skolars soon crossed again through Max Clarke to cut the deficit to just six-points despite a slow start for the hosts.

Ainscough produced more magic on the wing this time in attack as his break and offload allowed Brearley to race away in support to score under the sticks for a 12-24 score with minutes of the half left.

Thorman converted a penalty conversion on the half-time hooter for 14-24.

It was the hosts who started the second half on the front foot, scoring early in the 43rd minute through Mike Greenhalgh to give the home fans hope for a comeback with a 18-24 score.

Ashton, who signed with the club from Hunslet earlier in the week, later scored on his debut on the 49th minute to help Hornets to a 18-28 lead, with Dean hitting the post from out-wide with the conversion attempt.

Skolars, however, kept themselves in the game as Tom Firth crossed untouched just four minutes later for 24-28.

Luke Fowden helped restore Hornets’ healthy lead with a powerful charge up the middle to score for 24-34.

However, again Skolars never gave up and made it 30-34 with 14 minutes left through Lamont Bryan, who caught the Hornets defenders off guard as he took a quick tap from a penalty to power his way over.

It was a tense finish to the game, and Littlewood soon made his debut from the bench on the 73rd minute, replacing Ashton due to injury.

And it was that man, who signed with the club in pre-season from Bradford Bulls, who supported a long-range break from Warren to race away in what turned out to be the match-wining try for a 30-38 score on 75 minutes.

Again, Skolars never gave up and gave Hornets a late scare scoring in the corner on the 78th minute through Lameck Juma, and the visitors didn’t help by kicking the following restart out on the full for a tense final minute.

However, strong defence from Calland’s squad forced a knock on and it was a relieving full-time hooter to keep the side’s play-off push alive with a 34-38 victory.