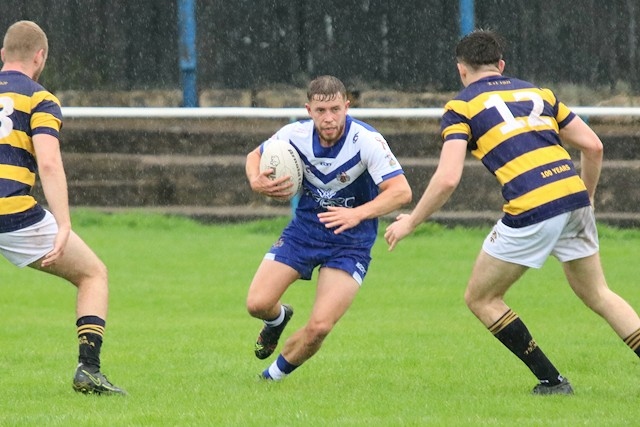 Harry MacDonald was named as the Mayfield man of the match

It was a strong Mayfield side which took the pitch on Saturday (7 August) to face Clock Face Miners from St Helens. The visitors were also at full strength and a great game was in prospect.

The first ten minutes were even, with not much to choose between the teams. But even at these early stages Mayfield looked to have the edge, with Lewis Butterworth, Liam Whalley and Harry MacDonald taking the game to Clock Face. Butterworth made a great break and got the ball away to Zac Hartley who touched down for the opening score, Cole Connolly converted 6 - 0.

Within two minutes The powerful Max Wood made more inroads into the Clock Face defence and Liam Whalley again showed his strength as he forced his way through for his sides second try, again converted by Connolly, 12 - 0.

Whalley, Butterworth, Liam Donnelly and Corey Newsham were playing some outstanding stuff as they probed and prodded for the all important next score. Against the run of play Clock Face managed the try as Mayfield failed to deal with an innocuous kick, the conversion made it 12 - 6.

Both sides threw the ball around well in the face of a never ending downpour and both sides inevitably made mistakes in the rain. Frustration crept in leading to penalties. Penalties equal field position and Clock Face capitalised on this, as with another speculative kick they managed to ground the ball to make it 12 - 10.

Clock Face were having a good spell and came out for the second half meaning business and Mayfield stuttered a little as they coughed up possession twice in the first three minutes. Clock face pounced again to take the lead for the first time, 12 - 14.

Mayfield clicked into gear at this point and Clock Face never got another look in. Aidan Gleeson in his last home game before he emigrates was making yards every time he got the ball. Butterworth combined with Hartley for the next try and Connolly again added the two for 18 - 14. He then tagged on a penalty to extend the lead 20 - 14.

Even when the impressive Whalley went to the bin for 10 minutes Mayfield never wavered and indeed increased their effort and the pressure on the opposition. Harry MacDonald was at the heart of everything, making himself busy and looking for work constantly. Butterworth and Wood weren't far behind him and when Whalley returned he made up for his absence by going over for the final try, Connolly added the two to complete the scoring at 26 - 14.

This win lifted the Mayfield into second spot in the division with them looking to improve that spot even further. This was Wood's last game for his club as he completes his signing for super league side Wigan Warriors. If he continues to improve at his recent rate it wont be long before he becomes a household name and all at the club wish him well.

The game was sponsored by Ace Electrical, Hanson Springs and Eddie Woods.