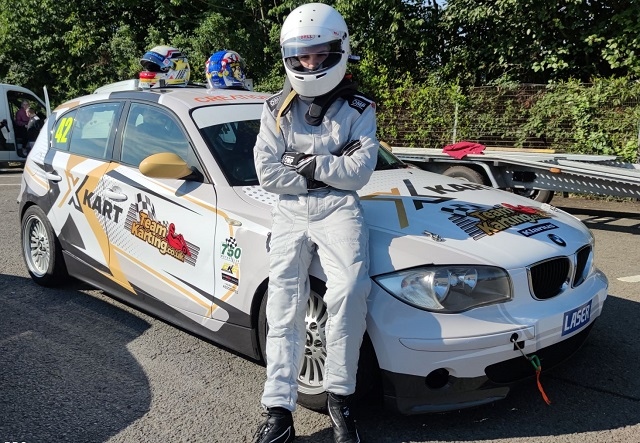 A 14-year-old racing driver from Rochdale has launched a campaign to kickstart his racing career after successfully passing his racing licence test, just days after securing yet more kart racing trophies.

Sandro Ballesteros, who is currently in year 10 at Wardle Academy, was diagnosed with autism when he was three and had his first experience in a kart aged five. His natural talent for racing was clear when he completed a beginner’s karting course in six weeks at the age of six, that takes on average, three months to pass.

Sandro has worked closely with the owner of TeamKarting circuit in Rochdale, Matty Street for many years. Matty also lives with autism and together, they have been involved in numerous racing with autism events.

Sando gives presentations at primary schools and TeamKarting and Sandro’s Able Racing project has helped introduce numerous autistic children to karting, some of which are now racing outdoors.

Matty founded ‘X-Kart’ in the UK earlier this year and invited Sandro to drive for the team. In his most recent race in the Junior Kart Championship held at Hooton on the weekend of 31 July/1 August, Sandro took the win in the ProKart class and second place in Junior Rotax behind his X-Kart teammate Jacob Jukes.

During the podium ceremony, Sandro presented a custom painted helmet on behalf of Racing with Autism Canada to Jenson Jowett, a young driver who is also on the autism spectrum.

Just a few days later, Sandro headed to Teesside circuit for his second experience driving a car as part of Matty’s Karting to Cars initiative. After less than five hours of total tuition, Sandro was driving solo. Two days later he took his ‘Association of Racing Driver Schools’ (ARDS) test at the Trac Mon Circuit at Anglesey which he passed confidently, impressing the examiner with his wet weather skills, reaching speeds of 90mph.

Now, Sandro is planning his next step on the racing ladder, aiming to race in the Junior Saloon Car Championship and is looking for commercial partners to join him, sharing in his future success. He has also launched a crowdfunding campaign and hopes to cover the roof of the car he secures with jigsaw pieces, each bearing the names of people who have supported him. Jigsaw pieces are recognised symbols of autism.

Sandro said: “It’s amazing how quickly things are progressing and I’m so excited about the journey ahead. All the sim racing I did in lockdown definitely helped me when it came to getting in a car for the first time. Although I had to get used to the feel of a real clutch, the gear changing came naturally, so I could focus on getting the lines right through the corners and the other things I usually do in a kart.

“Gaining my race licence is such a major step forward and I hope with the support of some sponsors and backers, I can start on the road towards a motorsport career. It’s really important for me to inspire others on the autistic spectrum as part of this, so that will be a big focus as I move forward.”

Anyone who wishes to donate to Sandro’s crowdfunding campaign can visit can do so here.