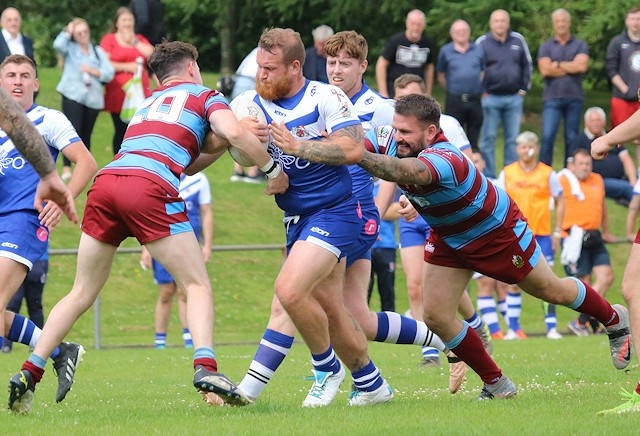 It's derby day again for Mayfield's National Conference League side tomorrow (Saturday 14 August) as they make the short trip to Oldham St Annes. St Annes were victorious in the reverse fixture back in June when Mayfield fielded a weakened side and were on the wrong end of a high scoring affair. They have only won one game since that victory while Mayfield have seen their fortunes improve to the point where they are now the second placed team in the league and looking to improve on that.

Coaches Sam Butterworth and Steve Wood have disregarded all that in training this week and are looking to compete and improve in every facet of their game. Butterworth said: "Despite recent results Annes handed us a hiding in June and are still only two points adrift of us. This is a game we need to win if we are serious about the play offs, and believe me, we are.

"The first half of the season was poor by our standards we leaked points like a sieve. We have tightened up on that recently and are looking to improve on that every week. Returning players have strengthened the team and the defence. We still have room for improvement and we still need to improve on our discipline and ball retention. Every penalty and every lost ball means another six tackles and that drains a side leaving them vulnerable in the last ten minutes. We are looking to improve in every department and in every game. Hopefully today will show that, but Annes are a tough side on their own meadow so we will be pulling out all the stops."

The game against St Annes is a landmark for the club as long serving player Aidy Gleeson plays his last game for Mayfield. Aidy is emigrating next week to Dubai and is relishing the prospect.

"Rugby league and especially Mayfield has been a massive part of my life and I will miss it massively," he said. "But my girlfriend Jenny and I have decided that its now or never for us in regards of this move and our futures. I have loved my time at Mayfield having had highs and lows and I feel that the club is on the brink of something good both on and off the pitch."

The North West Men's League side are also on the road on Saturday with a game at Culcheth. Andy Reid and Craig White's side are again struggling this season with shortage of numbers. They will have several under 18s in the squad and will be fielding a young team. They go with high hopes though and will be looking to get their second win of the season against a side who are also in the bottom half of the table.

The Rochdale Masters are also in action on Saturday afternoon and will be looking to continue their good form. They entertain Leeds based Weetwood Rhinos at the Mayfield Sports Centre. As always they have a large squad and everyone will be involved in the game. Again there are players from across Rochdale turning out with Mayfield, Kirkholt, Spotland Rangers, Littleborough, Todmorden and Heywood represented as well as a couple of ex union lads. Organiser Carl Abraham, who is currently on a warm weather training break, said: "The turn out is great but we are still looking for representatives from the rest of the sides that used to be in Rochdale."