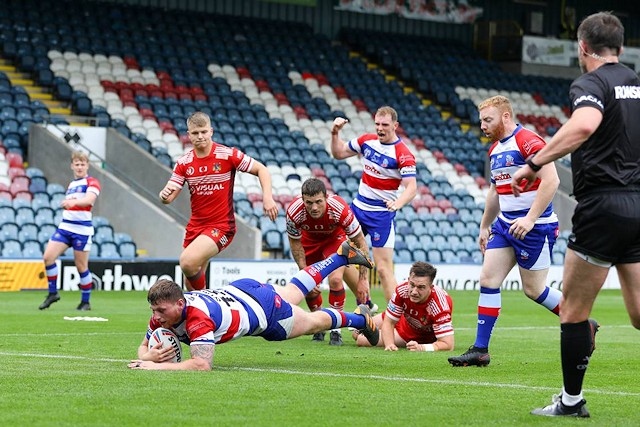 The afternoon at Rochdale was dedicated to young fan Freddie Lowe, who sadly lost his life earlier this month following a brave battle with cancer.

Sunday would have been the inspiring boy’s fourth birthday, and Hornets assistant coach Terry Whaley completed his 10km runs in 10 days challenge inside the ground ahead of kick-off, joined by Freddie’s father Chris.

Rob Fairclough returned to the side for the first time since round four against Coventry Bears, named in the halves alongside Reece Dean.

Cian Tyrer, who extended his loan move with Hornets during the week from Newcastle Thunder for the season, was named at fullback, while hooker Declan Sheridan was named on the wing.

Just like last week against Skolars, Hornets started off strongly with Fairclough providing an assist just four minutes into his return to find Shaun Robinson unmarked out-wide to dive over in the corner for an early 4-0 lead, with Dean hitting the post on the conversion attempt.

It got even better for the hosts three minutes later, as Tyrer crossed following a slick back-line play. This time, Dean converting for a 10-0 lead.

It was Matt Calland’s side who looked the strongest and had most possession for the opening 20, with Doncaster’s only chance coming through Ross Whitmore, who was held up under the sticks by Sean Penkywicz.

However, Doncaster hit back on the 24th minute through Jason Tali, with a long-ball finding the centre to slide over untouched in the corner for a 10-4 score, this time Jake Sweeting hitting the post.

Ross Peltier was shown a yellow card for a punch on Jordan Syme, as the Doncaster forward was held up under the sticks and reacted as he got to his feet on the 35th minute.

Hornets made the extra man count just minutes later, as Syme doubled his season tally and scored for the second week in a row for a 14-4 score at the half-time break.

Fairclough was having a strong game on his return and completed a successful ball steal on the second tackle on the restart, but Hornets couldn’t turn the early field position into points on that occasion.

However, 21 minutes into the second-half, it was his kick that led to Hornets’ next try. The half-back put up a huge bomb on the last from half-way and nobody at the back for Doncaster wanted it. The ball ended up in young Ben Forster’s hands, who found Josh Jordan-Roberts in support to extend the home side’s lead.

The official in the middle put Doncaster on a team warning early in the second half, and eventually Cockayne was shown a yellow card on the 67th minute. Dean made a break through the middle and kicked for himself to chase, only for the former Super League fullback to knock him down on his way.

Hornets again took advantage of the extra man as Tyrer crossed in the corner on the 71st minute for a 26-4 lead.

Wales international Gavin Bennion then powered his way over two minutes later under the sticks, knocking down several Doncaster defenders on his way for a score of 32-4.

Lewis Sheridan then added his name to the scoresheet on his return to the squad on 76 minutes, and Syme soon later scored his third of the season.

Tali scored a late consolation try for a full-time result of 44-8.