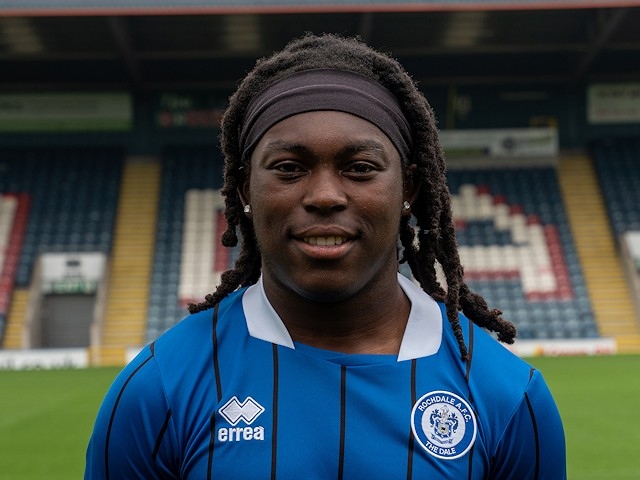 Rochdale earned their first win of the season and ended Northampton’s 100% start to the campaign with a comfortable victory at Sixfields Stadium. Max Taylor, Josh Andrews and Abraham Odoh all scored their first goals for the club as rookie manager Robbie Stockdale got his first 3 points as manager.

Covid issues still blighted the Dale squad heading into this fixture with Aidy White, Conor Grant and George Broadbent all still in isolation after positive tests. Jim McNulty travelled down via train on the day of the game after his isolation period ended at midnight the night before meaning he couldn’t stay in the team hotel with the rest of the squad. Stockdale was also without Jake Beesley through concussion protocols after the striker had to come off in the midweek game versus Forest Green Rovers after a bang on the head. New signing Jeriel Dorsett, a season long loan signing from Reading was named on the bench after his signing was confirmed late on Friday afternoon.

This fixture last season was a League One game and although Dale were yet to get a first win of this season, Northampton had won their previous two league games as well as beating Championship side Coventry in the EFL Cup.

Dale took the lead in the 17th minute with a well worked training ground routine. A freekick on the edge of the centre circle was played short to Aaron Morley who lifted the ball into the area towards the back post where defender Max Taylor nodded past Liam Roberts for his first Dale goal, but the lead wouldn’t last long.

Within three minutes, the hosts drew level. A free-kick near the halfway line was played into the box with Jon Guthrie racing on to power a header beyond Lynch for the equaliser.

An injury to Matty Done late in the first half and a slight injury concern with Sam Graham meant a double change at the break. Jimmy Keohane made his first appearance of the season whilst Dorsett was given his debut and the changes seemed to give Rochdale a little more impetuous going forward.

Keohane’s tenacity to reach a ball that seemed destined to roll out of play saw the Irishman cross for Andrews although the big striker blazed over the bar from inside the area.

Keohane was causing problems for the Cobblers and his header nine minutes into the second period was blocked with the loose ball just not sitting for Odoh or O’Keeffe as both tried to get shots away before the defence cleared.

Dorsett, who only joined up with the squad at the team hotel the night before, almost gifted Northampton the lead when his wayward back pass almost fell to Etete; Jay Lynch scurrying to get the ball away from the striker before flopping on it to stop the danger.

Keohane saw an angled header go just over the bar and Newby forced a low save from Roberts before Dale re-took the lead. Stephen Dooley’s through ball and Josh Andrew’s perfectly timed run from the half-way line saw the on-loan Birmingham striker run half the length of the pitch before sliding the ball past Roberts for his first senior goal.

Danny Cashman almost got in on the act of netting first goals for the club when he slid in but couldn’t get the touch as Keohane’s header across the face of goal evaded him.

Guthrie very nearly drew the host’s level for a second time as the clock ticked towards Its conclusion. The 6’ 3” defender climbing highest to meet a right-wing corner; his downward header bouncing just wide of the upright.

With Northampton pressing for a leveller, it was Dale who raced away at the other end to seal the win. Good work from Cashman on the half-way line to get around Guthrie saw the on-loan Coventry man slide a ball through to Odoh who outsprinted Nelson before emphatically finishing for his first career goal.

It was a very satisfying result with manager Robbie Stockdale admitting afterwards to a feeling of relief to get his first win as a manager.