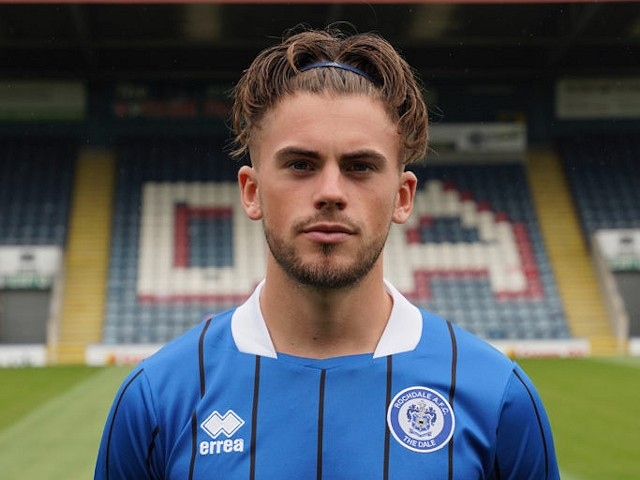 Rochdale progressed to the EFL Cup third round after a comfortable victory over ten-man Shrewsbury. After a tight first half, Dale took the lead from the penalty spot midway through the second when Jake Beesley was brought down by Matthew Pennington with the Shrews defender seeing red in the process. Beesley dusted himself down to power the ball past Marko Marosi for his first goal of the season. The tie was settled with 13 minutes left on the clock; substitute Alex Newby clipping a delightful cross into the area for Danny Cashman to head home from close range.

With three games in the space of six days, manager Robbie Stockdale made five changes for this EFL Cup second round tie at Shrewsbury. Joel Coleman made his Rochdale debut whilst Jeriel Dorsett made his full debut following his substitute appearance at Northampton on the weekend. Jake Beesley returned after concussion protocols saw him miss Saturday's win. Jimmy Keohane and Danny Cashman also started.

Shrewsbury came into the game having lost all four of their opening League One fixtures without scoring a single goal. Their only success this season so far has been a 2-2 draw in the first round of this competition that they won on penalties.

In a tight first half, neither goalkeeper was seriously stretched. Marosi blocking Dorsett’s close range shot after O’Connell nodded down a Morley corner about the closest either side came to troubling the scoresheet.

The hosts started the second period on the front foot and should have worked debutant Coleman three minutes after the re-start. Former Dale loanee Rekeil Pyke did well to get to the by line with his pull back perfect for Sam Cosgrove but the Birmingham loanee fired his shot well over the bar.

That was about all the Steve Cotterill’s side showed in a lacklustre performance as Dale stepped up a gear as they looked to progress. Morley’s powerful strike was patted down by Marosi but it wouldn’t take long afterwards for Dale to edge in front.

Odoh drove forward from the Dale half before feeding Beesley. The Dale striker’s touch took him beyond Pennington and into the box with the Shrewsbury defender bringing him down. Referee Scott Oldham immediately pointed to the spot and after taking a moment to deliberate, compounded Pennington’s anguish by brandishing the red card.

Beesley stepped up to power his spot kick past Marosi despite the keeper diving the right way.

Shrewsbury offered very little in response with Dale doubling their advantage eleven minutes later. Substitute Alex Newby, who had only been on the pitch for two minutes sent a teasing cross into the six-yard box with Cashman on hand to head in from close range.

That sealed Dale's passage through to the third round and the team will learn who they will play next when the draw takes place on Wednesday 25 August.

Rochdale's next game is against Colchester United on Friday night (27 August) at the Crown Oil Arena which is a celebration of the club’s 100th anniversary as a member of the Football League.

Over 30 former players have confirmed their attendance at the match, including Dennis Butler, Gary Jones, Lee McEvily, Joe Thompson and Billy Rudd. The players will parade around the pitch at half-time for supporters to show their appreciation.

From 5pm there will be an outdoor bar on the Crown Oil Arena car park, serving craft ales, cider and wine; live acoustic music from artists Alex Spencer, Leah Fisher and Steven O’Toole; free activities on the 5-a-side pitch; an inflatable penalty shootout and the Ratcliffe Bars is open from 5pm.

If you're attending a match for the first time this season - cash turnstiles are no longer in operation at the Crown Oil Arena - it is barcoded entry only.

Supporters can use the online ticketing site to purchase their tickets before coming to the ground or buy your tickets over the phone by calling 01706 644648 (option 1) and collect your ticket on the day of the game.

Buying online is the quickest and easiest way buy your match tickets and you can do so by following this link www.rafcshop.co.uk/tickets/match-day-tickets

You can save your e-ticket directly to your phone and scan upon entry to the turnstiles.

Supporters can also purchase in person from the Ticket Office, using either cash or card, in the run up to the game, or on matchday itself. If you plan on buying on the day of the game, please arrive at the ground early and leave plenty of time to visit the Ticket Office.