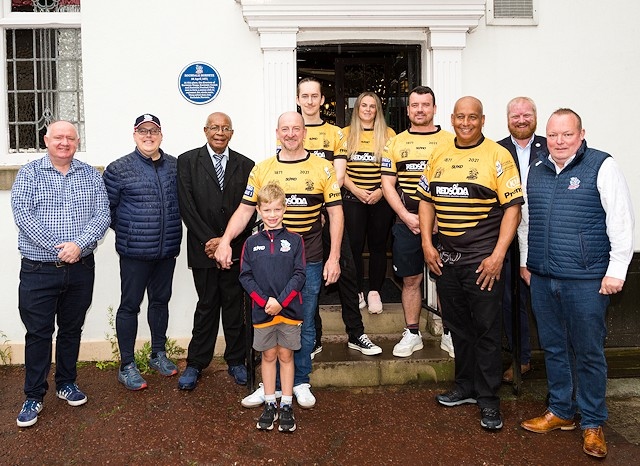 Players from through the years also attended the unveiling including one of the original Fijian pioneers Michael Ratu Snr who signed for Hornets in 1965, and his son Emon, who played for the club in the 1990s

Rochdale Hornets were this week issued with a blue plaque to commemorate their 150th year.

The plaque has been fitted outside the Roebuck Hotel in Yorkshire Street which is the site where the club was formed in April 1871.

Captains from each of the club’s three teams were in attendance with Sean Penkywicz, Claire Collins and Jordan Holt representing the men’s, women’s and wheelchair rugby league teams respectively.

Each of the representatives wore the club’s amber and black jersey which was the club’s official colours following their formation and has been brought back in 2021.

Players from through the years also attended the unveiling including one of the original Fijian pioneers Michael Ratu Snr who signed for Hornets in 1965, and his son Emon, who played for the club in the 1990s.

The Fijian connection represents a vast and interesting history that the club has enjoyed in its 150 years, and it is something they have worked hard to celebrate.

Former Hornets chairman, Mark Wynn who funded the plaque, said: “During my tenure as chairman, we had a huge focus on remembering and respecting the history of the club. Whether that be through the creation of a museum at Spotland, Heroes of Hornets awards or nurturing our relationship with Fiji it is important that we celebrate our roots.

“The installation of the blue plaque marks a monumental piece of history for the club, town and spirt of rugby league. It’s something all supporters can be proud of.”

Hornets chairman, Andy Mazey added: “It was a real honour to be with some fantastic people on Saturday for the unveiling of an official RFL blue plaque to symbolise 150 years of Rochdale Hornets at the very place it all began."

The unveiling of the plaque is part of a series of events celebrating the club’s 150th year while Mark Wynn and fellow former Hornets chair, Jim Stringer are writing a book that explores the history of Hornets from 1871 until present day which is due to launch later this year.