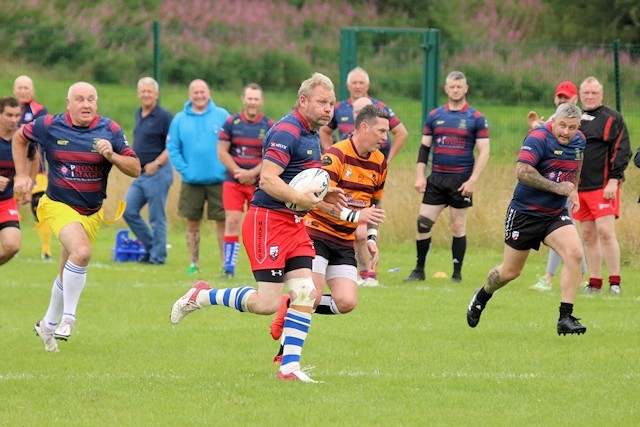 The Rochdale Masters team took to the field on Saturday 31 July, for a game against the Underbank Masters side.

The Rochdale Masters side has been formed to encourage older players back to the sport and support grassroots clubs whilst having fun.

In a game that was played in a fantastic spirit Mark Kelly showed he had lost none of his silky skills as he orchestrated the team around the pitch. Andy Duffy was in the middle of everything, if only to offer his opinion on what was going on. Ziggy Ahmed put a good shift in, in his first masters outing this season but the pick of the bunch on the day was David Chrimes who worked tirelessly.

Officially, there are no winners in the Masters games as the game focuses on playing and having in great spirit.

One wit on the sideline was heard to comment: "There's more bandages out there than the last remake of the Mummy."

The masters concept is really taking off at the minute in Rochdale with around twenty five players attending training on Friday evening at the Mayfield club followed by a debriefing in the club house.

Organiser Carl Abraham said: "We have 25 to 30 lads at the minute but you can never have enough. This is a fantastic opportunity for ex players to get together have a laugh and reminisce about the old days. It doesn't matter who you played for, in fact we would love players from all Rochdales old clubs to take part. There is no better evening than one spent with the rugby lads, telling all the old tales and recalling their exploits. Although the tales do get taller as the evening goes by but it is brilliant. So come on down and join in even if you're not sure about playing come down on Friday and have a laugh, it'll do you good."

All training and matches will be held at the home of Rochdale Mayfield ARLFC, in Castleton, with training being held every Friday from 6-7pm.