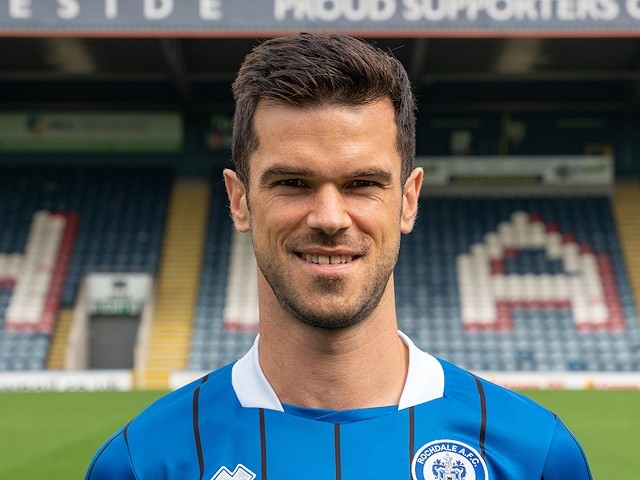 Jimmy Keohane’s first goal of the season rescued a point against Colchester United after Dale’s Max Taylor scored an unfortunate own goal just before half-time. The Irishman finished off a swift move down the right to open his account and earn Robbie Stockdale’s side a point on the 100th anniversary of Rochdale’s first ever game in the football league.

On an evening of celebration, over 40 ex-players from different eras in the club’s history were invited to join the party. Billy Rudd, Dennis Butler and Derek Ryder from the 1968/69 promotion winning side, former manager Keith Hill and record appearance holder Gary Jones were among some of the invited guests to witness the class of 2021.

Manager Robbie Stockdale initially made two changes to the side that beat Shrewsbury in midweek but an injury to goalkeeper Jay Lynch in the warm saw Joel Coleman make his first league appearance for the club. Alex Newby was preferred to Danny Cashman in the starting line-up.

Having won their last two league and cup outings, the home side were full of confidence and had some early sights at goal although both Abraham Odoh and Corey O’Keeffe failed to hit the target. The only goal of the first half was entirely down to Dale with Max Taylor scoring the own goal. A throw in of the right was played back to Taylor who under no pressure, passed back to Coleman but the pass was too firm and away from where the keeper was positioned, and the ball rolled into the unguarded net.

Colchester started the second half on the front foot as they looked to wrap the game up. Much travelled striker Frank Nouble had the best opportunity after he latched onto a header into his path; his angled shot only finding the side netting.

Dale levelled the score just after the hour mark through Jimmy Keohane. A lovely ball over the top was brilliantly controlled by Beesley who in turn found Newby. The winger dropped his shoulder before sliding a ball to Keohane with the unmarked wing back having the simple task of slotting in his first goal of the campaign.

Both sides went in search of a winner. Brendan Wiredu saw his header land on the roof of the net whilst substitute Kennedy forced a smart save from Coleman with an outstretched foot.

Corey O’Keeffe had penalty claims waived away by referee Rebecca Welch with the Dale man probably showing too much theatrics in his attempts to earn a spot kick.