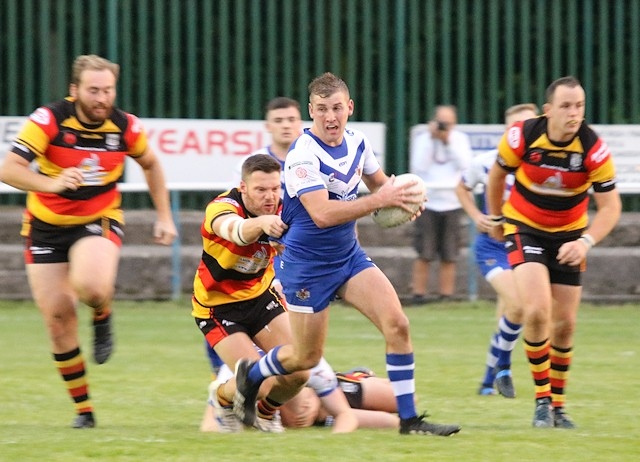 Liam Donnelly on his way to scoring

Pilkingtons arrived at the Mayfield Sports Centre on Friday night (27 August) with a reputation as the form team and a team packed with quality players and they lived up to that billing as they showed that quality in every department.

Within the first five minutes they were 0 - 6 up after a blistering start and it only took another ten before they had doubled that score 0 - 12.

Mayfield were playing decent stuff but were unable to finish their plays, with the ball going to ground within metres of the Pilkington line on at least three occasions. Cole Connolly and Zac Hartley tried everything to get their side back in the running but poor decisions and lost possession hampered their efforts.

Mayfield began to work well and now it was only a ferocious Pilkingtons defence that was stopping them crossing the line, Harry Macdonald, Corey Newsham and Lee Registe were showing touches of class and the crowd sensed it was only a matter of time before Mayfield scored.

The Pilks full back had other ideas though as once more he ripped the Mayfield defence to shreds as he scored his sides third try to make it 0 - 18.

Mayfield were under the cosh now and many teams would have folded at this point, but not this Mayfield side who showed a great resilience as they upped their game and took the game right to the opposition. It was inevitably Connolly who made the difference with a couple of minutes to until the half time whistle. His break saw the supporting Jack Mconnachie get the try which set Mayfield on the road to a comeback, Connolly added the two, 6 - 18.

The second half saw a new Mayfield, they were disciplined, finished their sets and had picked up their defence to a point were Pilkingtons wouldn't cross the line again. Pilks showed they knew this as they opted for the two when awarded a penalty, 6 - 20.

Ieuan Higgs, Si Moore and Brandon Wood were strong in the tackle following the lead set by Connolly.

A great passage of play involving Higgs and Dec Sheridan saw Liam Donnelly force his way over in the corner to further cut the gap 10 - 20, and Mayfield were in the ascendency with everyone playing their part and everyone getting involved.

Lewis Butterworth again put in a good shift and his hard work out wide allowed space for Sheridan to work his magic and Higgs was the benefactor as he crashed over for a Connolly converted try. 16 - 20 and the crowd was going wild really getting behind their team and willing them on to victory.

Again sensing no way through the line and that Mayfield were continuing to up the intensity the Pilks full back popped over a drop goal to make it 16 - 21. The home side now needed a converted try to edge in front and this came from Connolly who showed great heart and a fearsome amount of raw power to force his way over the line for a try that he then converted to put his side in front for the first time in the game with only minutes to go.

The visitors weren't done though and forced their way back into the Mayfield twenty. They could have opted for another drop goal to level the score but instead with seconds remaining threw a long ball out which Corey Newsham plucked out of the air and raced the length of the field to cement a fantastic victory, Connolly rubbed the salt in as he added the two. The crowd went berserk as they showed their appreciation for what had been, beyond doubt the match of the season.

Cole Connolly took the man of the match award, closely followed by Lee Registe but this was a team performance with everyone playing their part and showing what this group of players are capable of.