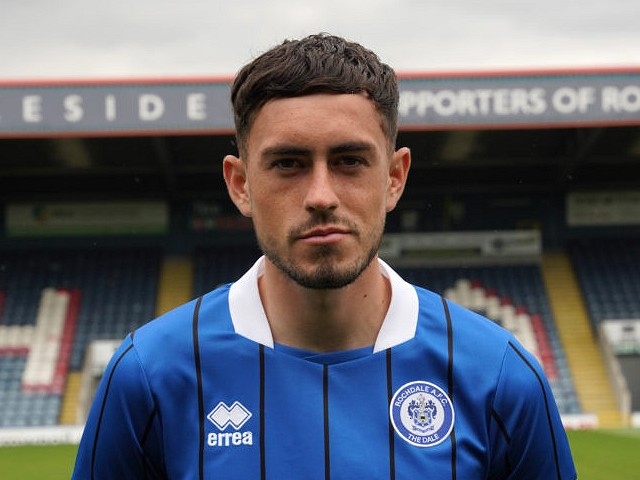 Rochdale ran out comfortable winners in their opening Northern Group D game in the Papa John’s Trophy on Tuesday (31 August) after putting four goals past Liverpool U21s without reply.

A stunning debut goal from Liam Kelly before half-time set Robbie Stockdale’s side onto a fourth straight game without loss in all competitions, with Corey O’Keeffe (2) and Josh Andrews finishing the scoring in the second half. Dale twice hit the post as they put in a thoroughly professional performance against their young opposition.

In his first game in the EFL Trophy as Rochdale manager, Stockdale named a strong side but still made eight changes from Friday’s draw against Colchester. Liam Kelly was handed his debut after he signed last week from Dutch side Feyenoord with young defender Joe Dunne also getting his first start of the season. Jim McNulty, Aidy White, Conor Grant and George Broadbent all made their first starts since they had to isolate because of Covid issues.

Liverpool U21’s had players ranging from 16 to 20 in their squad including goalkeeper Harvey Davies who was an unused substitute for Liverpool first team last season in their two Champions League quarter final games against Real Madrid whilst defender Billy Koumetio made his first team debut against FC Midtjylland; again in the Champions League two seasons ago.

The visitors started the game very brightly and looked a real threat in the opening half hour. Tyler Morton’s dipping shot was tipped over by Joel Coleman in the Dale goal whilst Matteo Ritaccio fired narrowly wide with Coleman scrambling across his goal mouth.

A brilliant move that saw Jack Bearne provide some real skill to create space in the box deserved a better finish; the 19-year-old firing over the bar when he should have done better.

Dale hadn’t really threatened up until the midway point through the first half when Liam Kelly warmed the hands of Davies in the Liverpool goal with a powerful strike after Corey O’Keeffe’s knock down.

Coleman had to be alert at the opposite end when Max Woltman burst into the box; his clipped shot was closed quickly by the Dale keeper who got enough of a touch to send the ball wide and those misses proved costly as the home side soon took control.

A well worked moved down the right saw O’Keeffe collect a nice through ball by Broadbent. The fullback’s backheel found Andrews who in turn played a perfect pass to Kelly who powered a shot into the top right corner of the goal for a debut goal just past the half hour.

The lead was almost doubled in first half stoppage time. Kelly’s left-wing corner was met by Max Taylor; the former Manchester United man saw his effort come back off the post.

The Red’s had enjoyed the majority of the first half, but the second half would be swayed in favour of Rochdale. With their first attack of the second period, O’Keeffe won and converted a penalty to double the advantage. The on loan full back burst into the box on the right before checking back in field with Luke Chambers impeding the Dale man with a penalty awarded. O’Keeffe stepped up to score his first senior goal, sending Davies the wrong way from 12 yards.

The visitors just couldn’t find their rhythm that they had in the first half as Dale enjoyed most of the play. Josh Andrews seeing a shot blocked after a poor kick out by Davies whilst substitute Ethan Brierley saw a shot saved.

Rochdale’s third came in the 73rd minute with O’Keeffe topping off a man-of-the-match performance with his second goal of the night. The defender got a little bit of luck as he raced forward as a lucky ricochet saw him clear inside the area and he finished emphatically past Davies.

The visiting keeper, who is coached in the Liverpool U18’s by former Rochdale goalkeeper Neil Edwards, kept the score down with stops from Brierley and Andrews but he could do nothing to stop Andrews making it 4-0 with twelve minutes remaining. Some great work from Cashman and an unselfish lay off saw Andrews smash in his second goal for the club and finish the scoring.

It was almost 5-0 in stoppage time; Brierley seeing his shot crash back off the post but it was a comfortable night for Rochdale as they top Northern Group D.