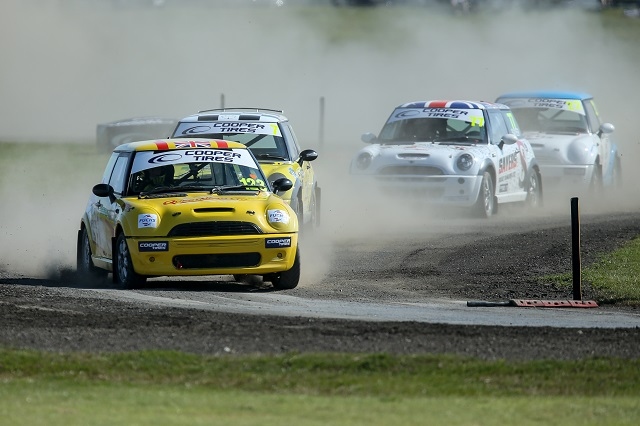 Brown enjoyed a confidence-boosting weekend behind the wheel of his Fuchs Lubricants backed MINI to win both Sunday and Monday’s final at the double-header weekend, which puts the Rochdale driver at the top of the championship standings as the season approaches the halfway point.

“I`m buzzing,” said an elated Brown at the podium celebrations.

“It was a tough start to the season so I really came here with the plan of just getting some positive points on the board. But to win not one, but two finals is pretty mind-blowing to be honest. It’s not quite sunk in yet.”

Brown made his return to the ultra-competitive single-make formula which runs as part of the prestigious British Rallycross Championship after a year away from the circuits due to the pandemic. Despite spending much of his career as a rally driver, in 2019 he made the switch to the race track and in his debut season on the British Rallycross, took a positive third overall in the championship.

Returning in 2021, a bumper grid would make repeating his success an uphill task and the opening round at Lydden Hill was a tough start to his campaign. As he settled back into the hotly contested series, Brown could only manage sixth and fourth at the first meeting of the season.

In a bid to hit the ground running in Wales, Brown headed to the non-championship BTRDA Clubmans Rallycross encounter at the Pembrey Circuit in early August, hoping to gain valuable seat time and hone his racecraft ahead of the all-important British Championship round. Third place was the reward and he headed back to the track a few weeks later eager to improve on his opening event score.

The weekend got off to the perfect start with heat one victory and took third in the semi-final. But the last race of the day is where it matters and Brown battled hard throughout the final to take his maiden British Rallycross championship win.

The second day offered the prime opportunity to repeat the accolade and Brown duly delivered. A solid performance throughout the heats saw him seal the valuable win in the semi-finals, putting him in pole position for the all-important final. And Brown made it stick, storming to a mighty second victory of the weekend and the lead of the championship as a result.

“I came to this round with a different mindset, to race harder and with more confidence,” said Brown.

“Along with better starts from the line it all came together this weekend and to take my first British Championship win was just fantastic, but to do it all over again the next day is very special. I’ve not had it easy in any of my races in the championship over the years and I was delighted with third in 2019. So to be leading the series is a welcome surprise and puts me in a great place for the next round.”

The series now heads to Knockhill in Scotland at the end of September for rounds five and six.