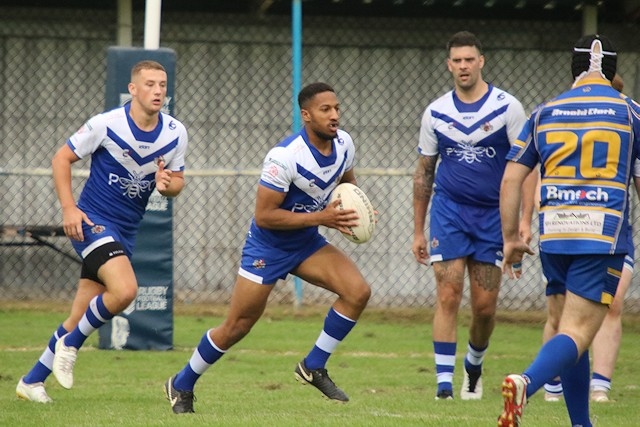 Mayfield started strongly against Crosfields on Saturday (4 September) and were 4 - 0 up after a couple of minutes after a great Lewis Butterworth try. It looked for a while like they were going to repeat last weeks heroics, but that was not to be as they slipped back into old habits.

Crosfields soon snatched the lead after some weak defence allowed them in for a converted score, 4 - 6.

Cole Connolly and Zac Hartley started to get a grip on the game and Si Moore, Liam Whalley and Liam Donnelly ran the ball well. Mayfield were looking the part again and Whalley reclaimed the lead for his side with a Connolly converted try, 10 - 6.

Butterworth was unlucky not to get a second try and it seemed a repeat performance was on the cards. Not for long though as the Mayfield defence went to sleep for long periods allowing the Crosfields side back into a game they should have been out of. The visitors steamed to a 10 - 24 lead and an upset looked on the cards.

Connolly and Hartley kept probing for Mayfield and it wasn't long before they crafted a great opportunity, which Lee Registe gratefully accepted, Connolly added the two points to make it 16 - 24.

Mayfield gave up possession from the restart and Crosfields came straight back at them, getting a try in the corner, making the score 16 - 28 at half time. It looked like Mayfield had blown it at this stage.

The coaches, Sam Butterworth and Steve Wood read the riot act in the dressing room and it had an immediate effect as Connolly went over in the corner right from the start, he converted his own try, 22 - 28 and game back on.

Crosfield however had not read the script and more weak defence from Mayfield allowed them  to extend their lead again 22 - 32.

Both sides had a player sent to the bin after a bit of a scuffle and Crosfields upped the physicality of the game. This seemed to suit the home side and they played their best rugby of the game with both Liams, Donnelly and Whaley getting tries in this period. and Mayfield were back in front, 34 - 32.

The last ten minutes of this game were not for the faint hearted as the lead changed hands five times 34 - 38, a quick thinking Ieuan Higgs try with Connolly conversion, 40 - 38. A needless penalty given away, 40 - 40 and poor Mayfield decision making allowing Crosfields to score a drop goal to lead by just one point, 40 - 41.

Then as Mayfield were pressing the Crosfields line they were awarded a soft penalty, Mr Cool himself Cole Connolly stepped up and sealed the game for his team, 42 - 41 on the final whistle and the crowd could rest easy.

This was a real rollercoaster of a game and one couldn't deny the excitement was on another scale.

The coaches though, were disappointed with aspects of the performance. Sam Butterworth said: "Our completion rate, our defence and our penalties conceded were just not good enough. That said though, our will to win and our never say die attitude was exceptional. We need to improve on all fronts though before we reach the play offs and I will be doing all I can to make that happen."