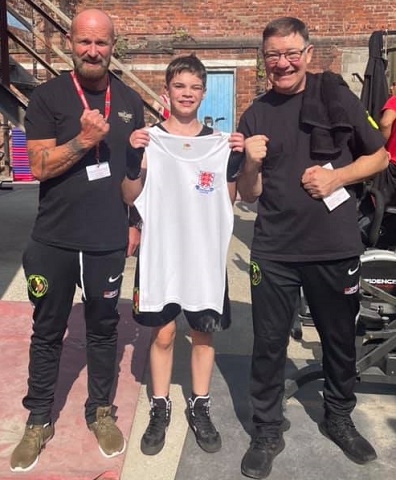 Hamer Amateur Boxing Club has opened the new season with another champion, ‘Champagne’ Charlie Braddock, who travelled to Tameside on 5 September to take on James White, of Technique Boxing Club, for the North West of England 44.5kg-46kg schoolboy title.

14-year-old Charlie put on a flawless performance giving his opponent a standing eight in the first round before going on and winning by a unanimous decision.

In the first round Braddock stormed out of the red corner on the bell, ready for action, and he unloaded straight one-two combinations to the head of his opponent.

When White backed off onto the ropes, Charlie unloaded another barrage of punches to both the body and head, which clearly hurt the Technique boxer. This continued throughout the round until Charlie led White into his own corner, where he landed a solid right-hand to the chin, which forced the referee to step in and administer a standing eight count to the Technique boxer, just as the bell rang to end the round.

In the interval Hamer head coach Steven Connellan told Charlie to continue to force the pace and not to let up when White backed onto the ropes.

Charlie continued to press forward in round two with accurate combinations, whilst both boxers stood toe-to-toe exchanging punches. Then the Hamer youngster landed another solid punch to the face, which forced White to drop his head.

Charlie continued to box with purpose, connecting with more effective punches. This caused White to lower his head yet again, leading him to receive a warning from the referee to keep his head up. Then, just before the sound of the bell came to end the round, Charlie landed another jolting right-hand to the chin.

Coach Connellan thought Charlie was winning the bout with ease, but he told the Hamer lad not to be complacent and to continue to press forward and keep the momentum going until he heard the final bell to end the contest. Charlie did just that as he stepped forward to confront White in the third and last round and both boxers entertained the crowd once again as they stood toe-to-toe in the middle of the ring whilst exchanging heavy punches upon each other.

White tried in vain to compete with the Hamer boxer, but Braddock’s punches slowly began to take effect once again and the Technique boxer received another warning from the referee to keep his head up. When the bell finally arrived, 'Champagne' Charlie was awarded a unanimous decision to take the North West Schoolboy title, to the delight of his supporters.

Charlie next meets Lucas Oyadiran, of No Limits boxing club, in Liverpool on Sunday 19 September.