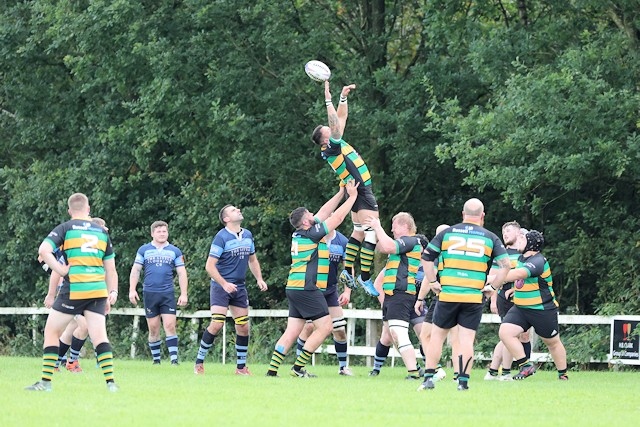 Littleborough's second away game this season on Saturday 11 September was the first time in some 25 years that Aspull and Littleborough had played each other.

The home side kicked off the match and put Boro under immediate pressure. Good tackling by Boro's Liam Lloyd under pressure in Boro's 10 metres area couldn't prevent Aspull scoring their first try on 15 minutes, after attacking play by Aspull's three-quarters. The conversion was successful, 7-0.

Boro were under constant pressure at this stage of the match and unfortunately Aspull continued passing the ball down their three-quarter line and crossed the line for another converted try to make the score 14-0.

Boro kept their heads up and attempted to get more into the game but unfortunately the home team kept up their strong attacking pressure into Boro's half, eventually finishing with their right winger crossing the line again for their third try but no conversion. 19-0.

In an attempt to get more into the game, Boro made three changes but still their opposition stayed in charge in Boro's half and scored with a successful penalty kick. 22-0.

With just short of five minutes left of the first half Littleborough started putting pressure on their host's tryline and after several attacks, Mathew Goldthorpe crossed the line for Boro's first try. They were able to add to this score before the half time whistle when George Roberts scored a penalty kick to make the half time score 22pts to 8pts.

At the start of the second half Boro came out where they left off in the first half and applied immediate pressure by good passing of the ball. Chris Kolbuck got the opposition on the wrong footing and crossed the line for Boro's second try, plus conversion, 22-15.

Now Boro were more involved in the game and if they had converted two penalties awarded to them, who knows what the final score may have been.

However, despite Littleborough scoring their third penalty of the second half, taking the score to 22-18, the home side scored their fourth try, plus conversion and converted a penalty to leave the final score at 32-19.