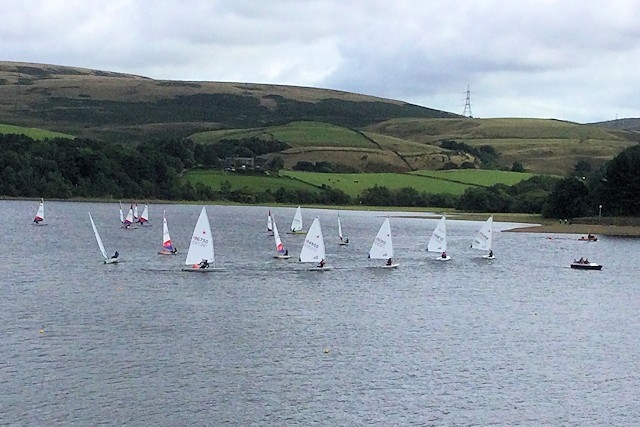 Junior Travellers – the Lasers lead the Toppers round the first mark

It was busy on Saturday 11 September at Hollingworth Lake with the sailing club hosting another round of the North West Junior Travellers series. There were 28 juniors under 19 years old racing, mainly in Lasers and Toppers. The westerly wind was not too strong, though there was the occasional capsize.

Visitors came from Ullswater, with several boats including some of the youngest sailors, Redesmere, Budworth, Leigh & Lowton and elsewhere. The results however were dominated by local sailors.

On Sunday 12 September, there was the lightest of airs as boats ghosted along. In these conditions, the seniors had an advantage in boats with bigger sails than the Juniors have on their Toppers. Will Smith was sailing his father’s Phantom and had the best results with wins in races 1 and 3. The Junior sailors did not venture out for the second and third races. However, Adam McGovern, in a Mirror, knew how to keep moving and won the second race. Tom Daniel and Ryan Richards, in a Merlin Rocket were runners-up overall.