For their opening match of the new season as junior colts (under 17s), Rochdale entertained Macclesfield at Moorgate Avenue on Sunday 12 September; the first time the two teams had met in several years.

Rochdale had finished the previous Covid-curtailed season strongly and had a solid start to the current campaign. Macclesfield have always been a well organised and competitive team, so it was no surprise that Rochdale found it difficult to break them down during the first half.

Macclesfield started as the stronger side but, as the half progressed, the Rochdale forwards began to make inroads into their opponent’s defence - with Garrett Myers, Declan O’Loughlin, Olly Mills and Jacob Jackson as the main ball carriers. Several opportunities were created and squandered with poor decision making and lack of composure by the home team at the crucial moments.

Eventually, the breakthrough came when the forwards won a scrum against the feed and the ball was moved wide. After some quick rucks, Will Rawlinson made the break and two inside passes later Ben Sunderland crossed the line for Rochdale (7-0).

That was the only score of the first half but Rochdale were beginning to understand what was required to break down the opposition defence. 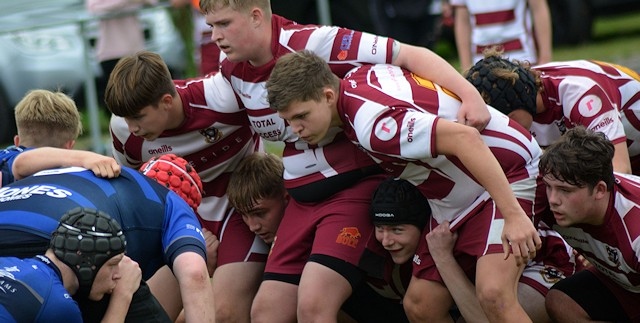 Rochdale continued the second half the same way as they had finished the first, pinning Macclesfield back and forcing them to kick out of their own 22. One such kick allowed Rochdale fullback, Ben Kershaw, time to gather and make 20 metres before releasing Will Simmonds, who crossed the halfway before finding Sunderland in support. He then linked first with Jackson then fed Mills who romped in from 20 metres for the try of the match.

Rochdale were beginning to dominate now and, despite losing a lineout, the awkward bounce allowed James O’Connell to hack through and beat the full back to the ball, regather, and score (19-0). Rochdale were playing with real freedom now and got their off-loading game going, making large gains through the middle of the defence.

The next score soon arrived. After another scrum against the feed, Rochdale number eight, Mills picked up and drove through a splintered pack and over the line (26-0).

Macclesfield have to be commended for their resilience as, with no substitutes, each player stayed on for the full game and eventually this began to take its toll, especially on the forwards.

Simmonds was the beneficiary of some quick thinking when, from a quick tap and chip over by Mitch Holt, the ball bounced into his hands and he was able to cross under the post (33-0).

Rochdale concluded the scoring after another quick tap, delivering the ball wide to Nick Wright who followed his pass to receive the return inside ball and score in the corner (40-0). Kicking duties were shared but mention must be made of Holt who slotted some difficult touchline conversions to keep the score line ticking over.

All in all, a really good team performance, with everyone contributing - whether it was lineout, scrum, breakdown or open play. Especially pleasing was how the team adapted and rectified the mistakes of the first half to produce a near perfect second half. Man of the match could have gone to any number of people, however, the accolade was awarded to Olly Mills for a fine all round attacking display.