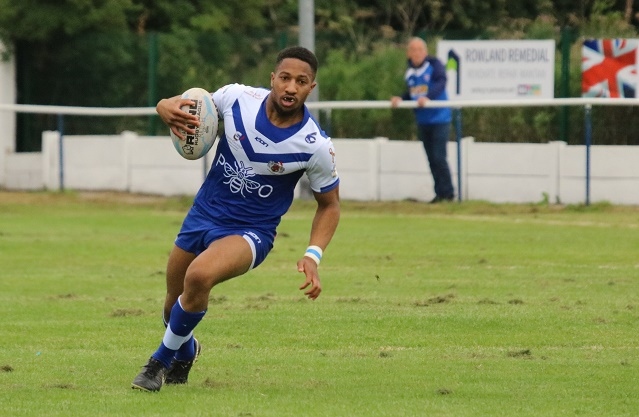 The writing was on the wall before Mayfield had even boarded the bus for Saturday’s (18 September) 32-12 loss against Hunslet.

Five players had withdrawn from the squad due to injuries, leaving Sam Butterworth and Steve Wood reshuffling the team on the coach on the way to the Leeds – not the start you want on the way to face the in-form team of the moment.

The lads that turned out put in a great performance and with a bit more luck the outcome could have been different.

With a big pack and two good half-backs, Hunslet were all over Mayfield from the start.

Good defence from Mayfield kept them out for the first ten minutes; Jack McConnachie and Liam Donnelly in particular were outstanding in their defensive efforts. Once they had crossed the line, the home side piled on the pressure looking for more and – but for a massive effort from Mayfield – they would have piled on the points.

Lewis Butterworth and Lee Registe began having an impact on the game as Zac Hartley began to get more involved. Hunslet lived up to their reputation as a superb defensive side and Mayfield just couldn't break the line. Jack Rush and Si Moore kept trying to get the breakthrough for their team, but it wouldn't happen for them.

Hunslet managed two more tries before half-time to make it 14-0. That would have been game over for most sides, but Mayfield showed they are better than that.

They rallied from the start of the second half, and when Rush powered over for the first score, the fight back was on. Hartley converted; 14-6.

Hunslet fought back though and increased the lead with a well-taken try, 20-6. They were pressing the Mayfield game again when a brilliant interception from Lee Registe saw him race the full length to touch down under the sticks, Hartley added the 2, 20-12.

Mayfield were right back in this game now and an upset looked on the cards. It could have happened, but the referee deemed a knock-on as Dec Sheridan went in for a score, which could have made the difference.

It was not to be though and the Hunslet side regrouped: the next score – which was always going to be an important one – went to them, 26-12.

Another converted score made it 32-12 and that was that, but Butterworth and Wood were left thinking what could have been.

Butterworth said: “We were on top when Dec had his try disallowed. If that had been given, I feel we would have kicked on from there and who knows what would have happened.”