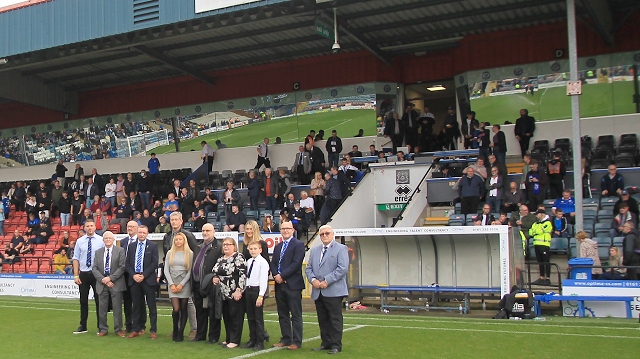 The main stand at the Crown Oil Arena has been renamed as the David Kilpatrick stand, in memory of the club’s former chairman who sadly died last week.

Mr Kilpatrick’s family were in attendance at Saturday’s game against Oldham Athletic as guests of the club and chairman Simon Gauge informed them of the news, on behalf of the board of directors, prior to kick-off.

An announcement was made to supporters at half-time, as his family were welcomed onto the pitch.

The renaming of the stand recognises the outstanding contribution that Mr Kilpatrick made to the Dale during his long-association with the club that dated back over forty years.

In August 1980, Spotland had a different look and feel to the modern ground that fans visit today. The club had been through turbulent times with several re-election applications.

Following the departure of long-standing chairman, Fred Ratcliffe, the club faced a challenge of a different type. As the debts built up and leverages against Spotland grew, Littleborough-based businessman David Kilpatrick, then aged 36-years-old, stepped forward to join the board of directors along with his friend, Graham Morris.

In doing so, many say he saved Rochdale AFC and ensured his local football club didn’t disappear into the abyss. Many fans agree that Rochdale AFC would no longer exist without David and Graham.

As the years went on, the club – and Spotland – began to change.

Current Dale chairman Simon Gauge said: “David Kilpatrick and Graham Morris both did a fantastic job over many years and the club is here today because of their efforts. You only have to look at the comments on social media since last week to see what a massive impact the two of them have had. It’s absolutely incredible.

“David has been a massive part of this club and his sudden passing has brought that home. It unfortunately all seems very late in the day, but I’m pleased to be able to announce the renaming of the main stand as the David Kilpatrick Stand in recognition of his outstanding contribution to the club and what he achieved during his tenure as Chairman, as well as his continued support of the club in the years since then.

“I only knew David for a short period of time - around four or five months - but over that time it was clear to see how big a character he was. He was one of those people that you could never tire listening to.

“He’s an absolute inspiration to us all on how we want to run this club, including the values that he stood for - integrity and transparency. Those are what we want this club to be in the future so we, as a new board of directors, will certainly bear that in mind with how we move forward. He’ll have legacy at this football club for a very long time to come.”