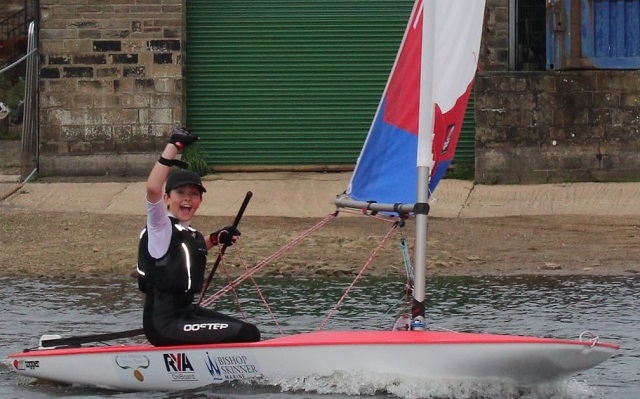 Some of the club’s junior sailors recorded impressive results away at the RYA Junior Championship this weekend (25 & 26 September). The championship was sailed at Derwent Reservoir Sailing Club in the North East, near Consett. On Saturday, in light winds, there was one race only but Sunday brought a north easterly breeze to keep sailors work harder.

Sailors were divided, by experience, into categories. In the Championship fleet of 37 Toppers, 13-year-old Jasper Bramwell finished 7th overall. For the less experienced, there was a Regatta fleet which Millie Hayfield won, with Xavier Bramwell in 4th place, sister Annabel in 7th and Annabelle Hayfield just behind in 8th place.

Conditions at Hollingworth Lake on Sunday (26 September) were excellent with a westerly breeze and sunshine. There were four Solos out who dominated the results with very close racing. Andy Carter was the overall winner with a win and 2 second places. Nick Hornsby won the first race, then had a second and a third. Nick Brook won the last race after a long challenge from Martin Brennan.

The faster boats of Richard and Heather Marsh (RS400) and Les Bithell with Emma Turner (Merlin Rocket) never managed to get far enough ahead to lead on handicap.