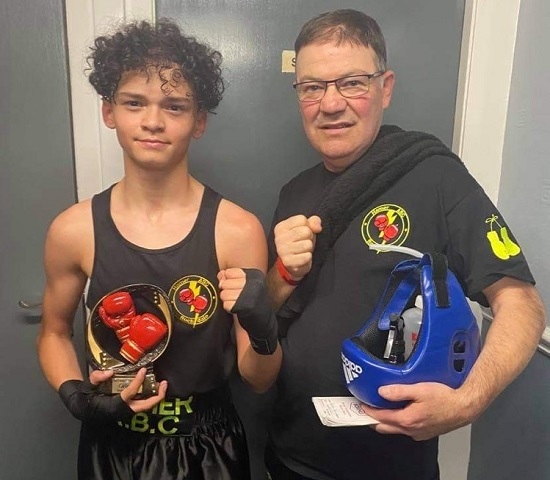 On the sound of the first bell, Austin, 13, stormed out of the blue corner eager to take the fight to the Accrington Lions boxer by landing a solid right-hand to the chin.

Both boxers raised the volume within the room as they stood toe-to-toe exchanging punches. But it was the Hamer boxer who had the slight edge as Heneghan took the centre of the ring to force Holden onto his back foot.

The Hamer youngster set an incredible pace again in the second round as he continuously connected with his right hand to the head of Holden, who was stimulated by the noise coming from his excited supporters, which motivated and encouraged him to continuously step back into the action and exchange more blows with Heneghan.

Before the start of the third and last round, Austin was told by his coach Steven Connellan, that he believed that he was winning but not to take it for granted.

He told the Hamer boxer that Holden would come out all guns blazing with the intention of regaining the momentum and the win, so he told Austin to bite down hard upon his gumshield and continue to take the fight to his opponent.

The round went as planned, when Holden rushed at Heneghan whilst unloading another barrage of punches, yet Heneghan stayed calm and as the Accrington boxer rushed towards him. Austin calmly stepped back onto his back foot to unload solid right-hand blows to the chin.

This continued throughout the round, which gave Austin the victory by unanimous decision. Austin and his opponent Tyree Holden were also awarded the fight of the night, which gained the Hamer boxer another trophy.