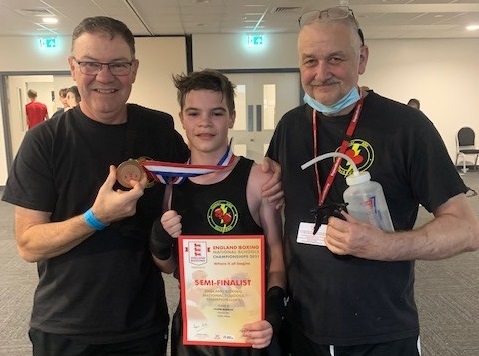 Fourteen-year-old ‘Champagne’ Charlie Braddock, of Hamer Amateur Boxing Club, ended the National Schoolboy contest as a semi-finalist after being defeated by Muhammad Safari, who went on to win the 44.5kg-46kg title.

Charlie met Safari, of The Ring Boxing Club, at the Vertu Arena, in Newcastle-Upon- Tyne, on Saturday (25 September), stepping into the ring at 6.30pm.

The bell rang for the first round and the Hamer boxer stepped right into the action, ready to exchange punches with his opponent, who immediately began to use his experience to land his southpaw left hand as Charlie stepped towards him.

This happened throughout the round and although the Hamer boxer managed to gain some success, his coach Steven Connellan knew that he was slightly behind, so before the start of the second round, Connellan told Braddock to keep his guard high and wait for Safari to come towards him, before unloading his right hand. If his opponent waited, then Charlie should step in close to unload his punches to both the body and head.

The bell rang for the second round and the Hamer boxer immediately stormed after his opponent with continuous punches. Charlie was forcing Safari upon his back foot again and his opponent was constantly warned by the referee for holding and putting his head down. Charlie was then given a standing eight count – for reasons unclear.

The Hamer boxer was forcing the action throughout the round as he constantly forced his opponent to step back, yet when Safari landed a punch at the Hamer youngster as he came towards him, it prompted the referee to administer a standing eight count, baffling the Hamer corner and the crowd in attendance.

Connellan knew that Charlie was losing the bout, so he told his boxer to go out all guns blazing and continue to take the fight to his opponent.

The bell rang for the third and final round and Charlie stormed out once again to take the fight to his opponent. Safari used his experience again as he waited for the Hamer youngster to step towards him, before landing his left hand. For reasons unknown, the referee stepped in to break up the action to administer Safari two warnings for actions not seen by the crowd.

The Hamer boxer continued to step into the action and force Safari onto his backfoot. Then with only eight seconds to go, the referee stepped between the two boxers again to administer Charlie another standing eight count, ending the bout in Safari’s favour.

Hamer coach Connellan knew that they had an uphill task ahead of them when the draw was made against this unbeaten opponent, who was also last year’s National Champion.

Safari had the better skills and experience, yet the Hamer youth boxed impressively throughout the contest to try and match his opponent, who used his experience to stay one step ahead of the Hamer youngster.

Even Safari’s coach said that the standing eight counts were 'unjustified', and that Charlie put on a good performance against his much more seasoned opponent.

Safari went on to win the national final whilst also becoming boxer of the tournament, so Charlie can be proud of the fact that he was beaten by the champion.