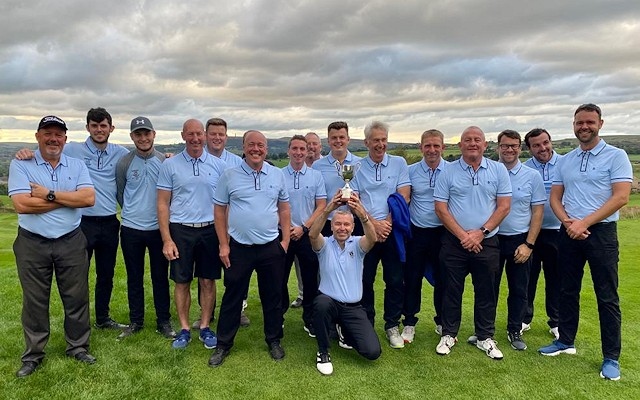 The last weekend of September marked a historic weekend for Rochdale Golf Club as it won both the Dunham Forest Trophy and the City Glass Men's Foursomes for the very first time - also making it the first time the same club has won both contests in the same year.

The Dunham Forest Trophy is the Manchester and District Golf Alliance’s blue riband Inter Club match play knock out competition. With 92 clubs entering, it is the biggest competition of its kind in the country.

Each club's team must feature a club professional and the six top amateurs, with a handicap index limit of six.

For the final at Dunham Forest Golf Club against Ashton-on-Mersey on Saturday 25 September, Rochdale fielded a young, fairly inexperienced team made up of the best young golfers at the club.

Rochdale won the match 4-3 but it was an extremely close affair with the score at 3-3 and the final game all square after 18 holes.

Davenport took the first points as Kane and Louis McCumesky had a 3/2 win over Dan and John Stapleton. Rochdale were quickly level with a comfortable 6/5 win for Darren Clarke and Chris Babbs over Phil Housley and Trevor Glover but Stuart and Scott Johnston restored the Davenport advantage with a 4/3 win over Matt Clarke and Nick Jackson.

Rochdale hit back with wins from Dan Matthews and Phil Whitworth by 2/1 over Andy Milne and Iain Faulkner and Scott Baxter and Jarrod Flett by 4/3 over Gareth Winstanley and Colin Burns.

In a thrilling finish Bob McGowan and Alex Carmichael again saw Davenport level at 3-3 with 3/1 win over Alex Walker and Antony Hardman.

It was all eyes on the final match which saw the players back on the 1st hole which is a downhill par three at just under 200 yards.

Jordan Jones teed off for Rochdale with a 7 iron and a good shot from him, followed by a deft chip to five feet from Martin Humphries meant the hole and the match were conceded by Davenport after they ended up in the water hazard from the tee.

Rochdale Golf Club captain Andrew Ingham said: "It's a very proud weekend for Rochdale Golf Club. It's a great acheivement for both teams. Thanks has to go to all the team members who have played in the different stages of the competitions to get us to the finals as well as the team captains and those who the supported the teams.

"It has certainly put Rochdale Golf Club on the map."